Wamuran is a small town and a locality in the Moreton Bay Region in Queensland, Australia. It is located west of the larger centre of Caboolture, and southeast of D'Aguilar. In the 2011 census, the town recorded a population of 2,850 persons, with a median age of 38 years. Wamuran is known for its fresh strawberries and pineapples. In the north of Wamuran are several small sections of Beerburrum West State Forest. Part of the south west boundary is marked by the Caboolture River. 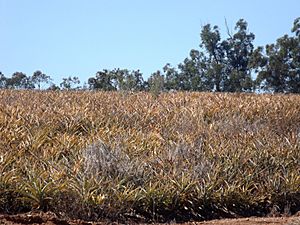 All content from Kiddle encyclopedia articles (including the article images and facts) can be freely used under Attribution-ShareAlike license, unless stated otherwise. Cite this article:
Wamuran, Queensland Facts for Kids. Kiddle Encyclopedia.