Calamvale is a southern suburb in the City of Brisbane, Queensland, Australia. In the 2016 census, Calamvale had a population of 17,124 people.

Calamvale was named after James Calam, an early settler and prominent landowner in the area. The Calam family built their homestead on a hill at the top of Calam Road near Beaudesert Road. The area was known as Calamvale long before it was officially listed as a suburb in 1972. In 1984, the Calams sold the homestead to the McGuire family, who built the Calamvale Hotel on the land. Urbanisation took place in the early 1990s, and development took place in several stages.

Households in Calamvale are primarily couples with children who are likely to be repaying between $1000 and $1200 per month on mortgage repayments. In general, people in Calamvale work in professional occupations. In 1996, 71% of the homes in Calamvale were owner-occupied, compared with 67% in 2001. The median house price for the calendar year 2005 was $359,750.

The median age of the Calamvale population was 31 years of age, 6 years below the Australian median.

Calamvale is serviced by nine bus routes operated by Brisbane Transport and Park Ridge Transit, as listed below. It is in Zone 2 of the TransLink zoning scheme.

There is a police station and several churches, including:

An eco-friendly feature of Calamvale is the Golden Pond Wetlands attached to Calamvale Creek.

A natural creek (part of a longer channel known as Scrubby Creek, but locally known as Calamvale Creek) and a riparian wetland run through the lower part of Calamvale. In the late 1990s, two constructed wetlands relying on storm water runoff were built upstream of the creek on each side of Golden Avenue. They are known as the Golden Pond wetlands.

The wetlands and creek, collectively called the Golden Pond wetland system, provide a small wildfowl habitat and a storm water treatment train designed to improve the quality of storm water runoff as it progresses down the creek.

The treatment train is made up of several parts, and purifies water as it flows through each part.

An upstream storm water drainage channel runs into a sediment basin, which collects the heaviest sediments and allows better-quality water to flow into Wetland 1. Water flows through a gross pollutant trap into Wetland 2, which was originally a small farm dam on the south side of the Golden Avenue road bridge. Overflow water from Wetland 2 runs into a natural riparian wetland fringed with melaleucas, and this runs into a natural creek with small lagoons.

The Calamvale wetlands and creek provide a home and a retreat for ducks, egrets, cormorants, spoonbills, herons, water dragons, turtles, eels, and a large number of other wildfowl and animals.

Environmental engineers from Brisbane’s Griffith University have conducted numerous studies on water quality at the creek and wetlands, and have presented papers at conferences internationally on the design and effectiveness of the treatment train.

The Calamvale Leopards are the local Australian Football League team. 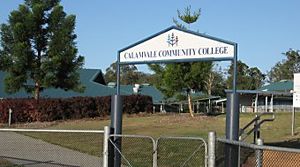 Actor Russell Dykstra grew up in the suburb, frequently entertaining commuters on the local 141 bus with his self-styled pantomimes while taking the long commute into St Laurence's College in South Brisbane as a schoolboy from 1979 to 1981.

All content from Kiddle encyclopedia articles (including the article images and facts) can be freely used under Attribution-ShareAlike license, unless stated otherwise. Cite this article:
Calamvale, Queensland Facts for Kids. Kiddle Encyclopedia.