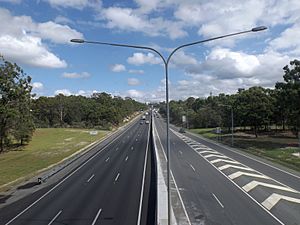 A small section of the suburb extends to Wembly Road.

Drewvale is an outer suburb of Brisbane, Australia. It is 28 kilometres (17 mi) south of the CBD and borders with Logan City. Drewvale is located at the interchange of the Gateway and Logan Motorways. It is the fourth most southern suburb of Brisbane, after Parkinson, Larapinta and Heathwood. However, Drewvale contains the southern-most residential properties in Brisbane, as the southern extents of Parkinson, Heathwood and Larapinta contain only industrial and commercial development.

The area was farmed by the Drew family from the 1870s. The locality was unofficially known as Drewvale for nearly a century until the suburb was officially named in 1971.

All content from Kiddle encyclopedia articles (including the article images and facts) can be freely used under Attribution-ShareAlike license, unless stated otherwise. Cite this article:
Drewvale, Queensland Facts for Kids. Kiddle Encyclopedia.