Berrinba is a suburb in Logan City, Queensland, Australia. Berrinba was once also within the City of Brisbane but that part of the suburb has been renamed Karawatha. At the 2011 Australian Census the suburb recorded a population of 1,382.

The naming of the suburb Berrinba is originated from an Aboriginal word meaning to indicate towards the south for example to the left of a speaker with the sunrise behind him/her. 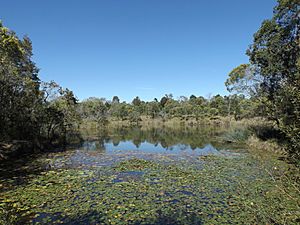 Berrinba Wetlands is a man-made recreational park covering 120 ha along Scrubby Creek. Scrubby Creek joins Slacks Creek which enters the Logan River. The park contains 8.5 km of walkways and bike tracks, nesting boxes and substantial bridges designed to collapse during flooding if required. Non-native trees have been removed and more than 400,000 native plants were planted.

All content from Kiddle encyclopedia articles (including the article images and facts) can be freely used under Attribution-ShareAlike license, unless stated otherwise. Cite this article:
Berrinba, Queensland Facts for Kids. Kiddle Encyclopedia.