Marsden is a suburb of Logan City, Queensland, in Australia. At the 2016 census the suburb had a population of approximately 14,000. 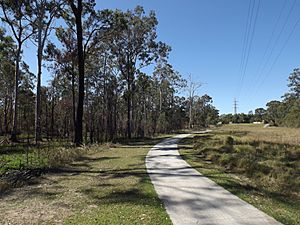 Marsden is also home to Scrubby Creek, which passes along the northern extent of the suburb. Along the creek, from near Third Avenue, through to Marsden Park Shopping Centre area is a series of parks, bike paths and walkways.

All content from Kiddle encyclopedia articles (including the article images and facts) can be freely used under Attribution-ShareAlike license, unless stated otherwise. Cite this article:
Marsden, Queensland Facts for Kids. Kiddle Encyclopedia.