Karana Downs is a locality in the west of the City of Brisbane, South-East Queensland, Australia. It is 22 kilometres (14 mi) from the Brisbane central business district. In the 2011 census, Karana Downs had a population of 3,826 people. The people of Karana Downs are represented in the Queensland Parliament by Christian Rowan the Liberal National Party member for Moggill.

The semi-rural, leafy suburb is bordered by the Brisbane River to the south and east, and by Mount Crosby Road to the north and west.

The modern locality of Karana Downs was developed from parts of the areas of Kholo, Lake Manchester, and Mount Crosby with 5 square kilometres (1.9 sq mi) of land being divided in 1973. The name Karana Downs was proposed by the developer; it has been suggested that Karana is an Aboriginal name meaning qiet place. Karana Downs was originally part of the Shire of Moreton and then later of the City of Ipswich. In the 1990s residents lobbied to become part of the City of Brisbane, and this occurred in 1998.

Kookaburra Park is a large park on the bank of the Brisbane River. Prior to the 2010–2011 Queensland floods, it included a boat ramp, children's play area, amphitheatre, fishing platform, and off-leash dog area. Virtually the entire park was destroyed by flood-waters and it remains closed while reconstruction is being undertaken. The park should open to the public again in late 2012 to middle 2013. Karana Downs also has many more parks such as Dumburru Park, Kupi Park, Heritage Park, Burrun Park, Murri Park, Lion's Nature Trail and Illawong Reserve. Many of the streets and parks in Karana Downs have Aboriginal names.

The Karana Downs Country Club has an 18-hole golf course, which formed part of the original plans for the Karana Downs development. In 2011, there were plans to redevelop the golf course into a medium density residential area; these plans were rejected by Brisbane City Council on 27 October 2011. An appeal to the Planning and Environmental Court by the developer was lodged but withdrawn in August 2012.

Due to the distance of Karana Downs to the centre of Brisbane, the suburb lacks a public bus service, however, in late 2006, a taxi van with a capacity of 10 people, started ferrying people every 20 minutes from 6:30am to 9am from Karana Downs, and nearby Mount Crosby and Anstead, to Bellbowrie, where commuters can link up with TransLink bus route 444. 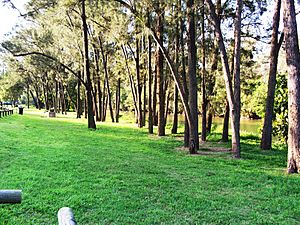 The median age of the Karana Downs population was 36 years of age, 1 year below the Australian median.

All content from Kiddle encyclopedia articles (including the article images and facts) can be freely used under Attribution-ShareAlike license, unless stated otherwise. Cite this article:
Karana Downs, Queensland Facts for Kids. Kiddle Encyclopedia.