Brookfield is a suburb of the City of Brisbane, Queensland, Australia, approximately 13 kilometres (8.1 mi) to the west of the Brisbane CBD. Brookfield was named by Mrs J. S. Brimblecombe due to the creeks and gullies in the area. 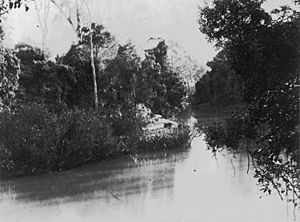 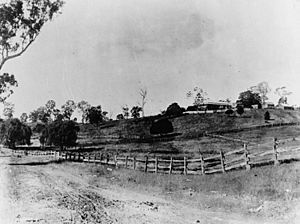 Brookfield is a largely rural suburb consisting primarily of acreage properties. Although there are a small number of farms, the vast majority of property is residential. Moggill Road passes through the southernmost tip of the suburb and Moggill Creek marks part of the suburb's eastern boundary. North of Brookfield are the forested hills and mountains in D'Aguilar National Park.

Brisbane was occupied by the Jagera and Turrbal Aboriginal groups. Development in the Brookfield area began in 1869, when the area was opened for logging and farming. Brookfield State School was opened in 1874 and Brookfield Post Office opened on 12 August 1876.

Brookfield has a number of heritage-listed sites, including:

All content from Kiddle encyclopedia articles (including the article images and facts) can be freely used under Attribution-ShareAlike license, unless stated otherwise. Cite this article:
Brookfield, Queensland Facts for Kids. Kiddle Encyclopedia.