The upscale retail precinct includes restaurants, cafes, shops, a supermarket, and a public plaza inside the old gas holder of the heritage-listed Newstead Gasworks. 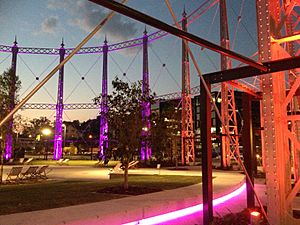 The tall iron structure of the No. 2 gas holder on Skyring Terrace is a remnant of the Gasworks, which was established in 1887 as Brisbane's second gas works. The structure, however, was originally located at the Petrie Bight gasworks, where it was erected in 1873.

Planning approval was given to the project in 2008.

The first stage of the development was opened in August 2013. On completion, Gasworks will include seven buildings featuring 17,000 square metres of retail, 103,500 square metres of commercial and about 750 residential apartments.

All content from Kiddle encyclopedia articles (including the article images and facts) can be freely used under Attribution-ShareAlike license, unless stated otherwise. Cite this article:
Gasworks Newstead Facts for Kids. Kiddle Encyclopedia.