Teneriffe is an inner suburb of Brisbane, Australia, 2.5 kilometres (1.6 mi) north-east of the CBD. lt borders Fortitude Valley to the west, Newstead to the north and New Farm to the south.

Teneriffe has a generally young and high income demographic, and is one of Brisbane's most expensive suburbs with a median house price in 2017 of over A$2 million. Residents have access to a riverside lifestyle, restaurants and extensive amenities.

The suburb was incorporated into Newstead in 1975, and again defined as a separate suburb in 2010. It was once an important wool trading hub and was the location of Australia's largest submarine base in World War II.

The 2016 census recorded 5,355 residents in Teneriffe. The Teneriffe ferry wharf connects it to CityCat and Cross River services. The studios of radio station Nova 106.9 are in Commercial Road.

One of the first European landowners in the area was James Gibbon. He purchased 48 hectares of land between Newstead and New Farm and named the property Teneriffe because it reminded him of Mount Teide in Tenerife, Canary Islands. Gibbon built Teneriffe House in 1865. The single storey building still stands today on what is known as Teneriffe Hill. 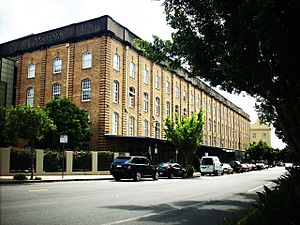 By the 1880s the area was being settled by white people. The area was served by horse drawn trams starting in 1885. In 1890 land near Teneriffe House was subdivided and auctioned. The 30 allotments were sold under the name Teneriffe Estate. From 1897 until December 1962 electric trams ran along Commercial Road. Early photographs of the suburb show trams displaying the destination "Bulimba", which has given rise to some confusion in later times. Originally the area was considered part of the suburb called Bulimba which then straddled both sides of the Brisbane River. Postal deliveries were often misdirected and as a result the western section of Bulimba, comprising the area now known as Teneriffe, was renamed before World War I. However, the unofficial use of Bulimba as an address on the northern side of the river persists for some decades, appearing on maps and in electoral rolls into the 1940s (although its use progressively declines). 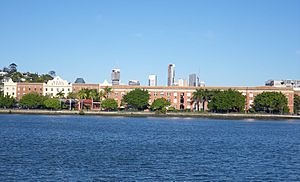 As wool exports from Queensland increased in the early 20th century, the economic importance of Teneriffe to the state also increased. The first wool store was built in 1909, with another three stores opening by 1915. Another nine wool stores were built, with the last two constructed during the 1950s. Well known architects designed these large buildings to represent the commercial success Australian wool producers experienced in the early 20th century. In 1927, the Australian Estates store was opened by the Duke and Duchess of York. It had the largest showroom in Australia and was able to store 24,000 bales.

During World War II the wharves served as Australia's largest submarine base with around 60 submarines based at Teneriffe. American and British submarines used the facilities, known as Capricon Wharf up until 1945. As container ships forced cargo shipments to the Port of Brisbane at the mouth of the river wool trading at Teneriffe ceased.

Through the conversion of wool stores and factories to residential apartments, the area has been transformed from a riverside industrial hub to a mostly high density residential area. Most of the Queenslander style homes have been preserved and renovated.

Teneriffe has a number of heritage-listed sites, including:

All content from Kiddle encyclopedia articles (including the article images and facts) can be freely used under Attribution-ShareAlike license, unless stated otherwise. Cite this article:
Teneriffe, Queensland Facts for Kids. Kiddle Encyclopedia.