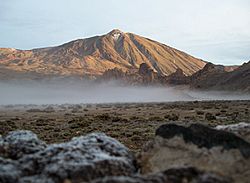 Teide is an active volcano on the island of Tenerife (Canary Islands, Spain).

The volcano is 3,718 meters above sea level. It is the highest mountain in Spain and any island in the Atlantic Ocean. It is 7,500 meters above the ocean floor, it is the third largest volcano in the world from its base.

Located in the Teide National Park declared in 2007 as a World Heritage Site by UNESCO.

All content from Kiddle encyclopedia articles (including the article images and facts) can be freely used under Attribution-ShareAlike license, unless stated otherwise. Cite this article:
Teide Facts for Kids. Kiddle Encyclopedia.