The Lachlan River is an important river in central New South Wales, Australia. 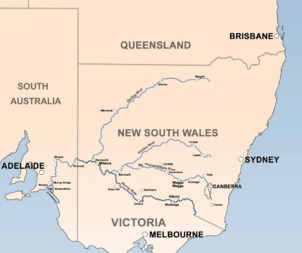 The Lachlan joins with the Murrumbidgee River

The river starts in the central mountains of New South Wales, near Gunning. Other rivers that join the Lachlan River are the Boorowa River, the Belubula River and the Abercrombie River. They join the Lachlan near the town of Cowra.

Wyangala Dam was built near Cowra to control the amount of water in the river. The Lachlan does not get its water from melting snow like the Murrumbidgee River or the Murray River. It does not have a regular amount of water flowing down it. In 1944 the flow was less than 1,000 megalitres (810 acre-feet). Six years later (1950) there was a flow of 10,900,000 megalitres (8.8 million acre feet). In dry years, for example April 1944 to April 1945, the Lachlan may have no water flowing in it at all. The Lachlan has flooded every 7 years since 1887 at Forbes. 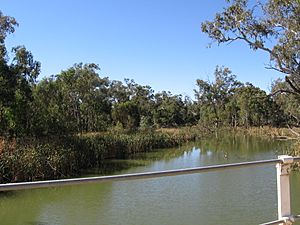 The Lachlan River flows west and then south, finishes in the Great Cumbung swamp. This swamp is near Oxley between Hay and Balranald. Water from this big (500 km²) swamp finally goes into the Murrumbidgee River. Water from the Lachlan is used for farming.

The Lachlan river is in the area where the aboriginal people called the Wiradjuri lived. The Wiradjuri land has been called "the land of the three rivers, the Wambool (Macquarie), the Kalare (Lachlan) and the Murrumbidjeri (Murrumbidgee) . The Murray River was the south side of Wiradjuri land. The change from forest to open grassland was the east side."

The first European to find the Lachlan River in 1815 was Acting-Surveyor George William Evans. He named the river after Lachlan Macquarie, the Governor of New South Wales. The Lachlan River was explored by John Oxley in 1817.

In the early days of New South Wales, the south part of the Lachlan was known as Fish River. With more exploration it was realized that two rivers were the same river and the name Fish River was dropped.

Now indigenous and white people live on the Lachlan river.

Major rivers that flow into the Lachlan

Towns along the Lachlan

All content from Kiddle encyclopedia articles (including the article images and facts) can be freely used under Attribution-ShareAlike license, unless stated otherwise. Cite this article:
Lachlan River Facts for Kids. Kiddle Encyclopedia.