Condobolin is a town in the west of the Central West region of New South Wales, Australia, on the Lachlan River. At the 2011 census, Condobolin had a population of 3,743. 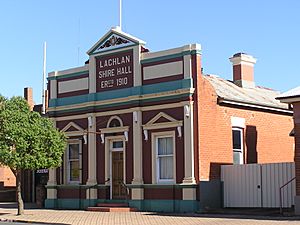 Prior to European settlement, the area was inhabited by the Wiradjuri people.

The name Condobolin is suggested by some to have evolved from the Aboriginal word Cundabullen — shallow crossing. The crossing was located a short distance below the junction of the Lachlan River and the Goobang Creek. Others suggest that the town's name from the Wiradjuri word for 'hop bush', or 'hop brush'.

The area was explored by John Oxley in 1817 and Thomas Mitchell in 1836. The 'Condoublin' run was established by 1844. There had been squatters in the district since Mitchell's 1836 exploration. Closer settlement of the area began in 1880 when the large runs were broken up into smaller holdings.

The town of Condobolin was proclaimed in 1859. The railway arrived in 1898, and the town's population boomed, assisted by finds in 1885 of copper north of the town and in 1896 of gold in the district, north-west of the town. A major copper and gold mine was in operation at Condobolin from 1898 until around 1910. Agriculture is still a major influence on the town, production having expanded with the damming of the Lachlan River in 1935 by the Wyangala Dam. Wheat, barley, canola, wool, sheep and cattle are produced in the district. In more recent years irrigation has brought horticulture and cotton to the Lachlan River area.

The video clip for Shannon Noll's first single What About Me? was filmed in Condobolin.

Condobolin is very close to Mount Tilga, which is said by some to be the geographical centre of New South Wales. Geosciences Australia's Bicentennial project however suggests near the Five Ways, 33 km west north west of Tottenham as one possible centre and makes no reference to Mount Tilga.

Condobolin is located at the junction of Lachlan River and Goobang Creek. It is 463 kilometres (288 mi) west of Australia's largest city, Sydney.

Close to Condobolin is the Overflow Station, the setting of the poem Clancy of the Overflow by Banjo Paterson. The poem is about a Queensland drover and a sheep shearer responsible for herding large mobs of sheep long distances to market.

Condobolin is the home to a two-day cross country navigational rally, known as the "Condo 750". Now in its 11th year, the Condo 750 runs over a variety of private and public roads and tracks and attracts competitors from all over Australia. It is a CAMS and MA sanctioned event. The course is made up of competitive sections known as selective sections which are timed over private tracks around the various sheep and cattle stations, these range in length from 20 to 70 kilometres (12 to 43 mi). Non-competitive road sections on public roads join the sections, these range from 0.2 to 30 kilometres (0.12 to 18.64 mi). The total length of the course is over 750 kilometres (470 mi). Condobolin is also home to beer club, which is held at 7pm on the last Wednesday night of the month at Seeto's house.

Condobolin railway station opened in 1898 and lies on the Broken Hill railway line. The station is served by the twice-weekly Indian Pacific train, as well as NSW TrainLink's Broken Hill Outback Xplorer train. This train heads to Broken Hill on Mondays (Stopping at 2:01pm) and to Sydney on Tuesdays (Stopping at 1:41pm).

All content from Kiddle encyclopedia articles (including the article images and facts) can be freely used under Attribution-ShareAlike license, unless stated otherwise. Cite this article:
Condobolin Facts for Kids. Kiddle Encyclopedia.