Hillston is a township in western New South Wales, Australia, in Carrathool Shire, on the banks of the Lachlan River. It was founded in 1863 and at the 2016 census had a population of 1,465. 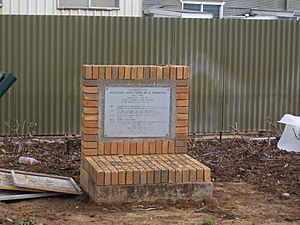 Memorial marking the centenary of the establishment of the town

John Oxley and his exploration party were the first European visitors to the Hillston district, in 1817. Oxley wrote in his journal: "country uninhabitable and useless for all purposes of civilised man".

In 1839 William Hovell followed the Lachlan River to near the site of present-day Hillston and took up a pastoral holding called "Bellingerambil" (later named "Cowl Cowl").

The locality of present-day Hillston was a crossing-place for stock on the Lachlan River. The earliest European name for the place was 'Daisy Plains' or ‘Daisy Hill’. Later it became known as "Redbank" (following the Wiradjuri name 'Melnunni', meaning "red soil"). In 1863 a stockman named William Ward Hill from nearby "Roto" station established an inn – the Redbank Hotel – at the location.  William Hill died on 10 July 1867 of "exhaustion from intemperance" and his widow, Elizabeth, took over the licence of the Redbank Hotel (which she held until about 1871).  In 1869, when the first post office was opened, the township was renamed Hillston, after its founding publican.

The site of Hillston was originally on land owned by John McGee, who obtained a sub-division and sold lots by public auction, "the lots realising high prices". The Government also surveyed a township just north of McGee’s land.  Sixty-four lots at Hillston North were also auctioned, bringing "up to £100 per acre". Thus two townships developed side-by-side.

Hillston developed as a service centre to the surrounding pastoral holdings, so the pace of development of the township was closely linked to prevailing conditions as they affected the district pastoral enterprises.  Due in large measure to drought conditions in the district there was little or no progress of the township during the mid-1860s.  However more favourable seasons by the end of the decade, with the return of more reliable rainfall, led to a revitalization of Hillston’s prospects.

Hillston developed as a service centre to the surrounding pastoral holdings. The Moss brothers, who were successful store-owners at Hay, established a store at Hillston by 1869. Hillston Post Office opened on 1 February 1869. In mid-1871 the partnership between the brothers was dissolved and Louis Moss ran the Hillston store on his own account.

The first Police Court at Hillston was held on 28 August 1873 in a room at one of the hotels in the town.

The first church at Hillston was of the Anglican denomination.  A Roman Catholic church was built during the 1880s.  The first Pastoral and Agricultural Show was held at Hillston in 1881.  A hospital was erected in the township in 1882; the cost of the building was raised by voluntary subscription.  A new post-office was completed in 1883 (in the charge of Mr. W. S. Bellamy).  A courthouse at Hillston was completed in about 1883.

Hillston became a municipality in 1888.

The store that became known as Nall, Jackson & Co. Ltd. was established in 1889; the firm had changed its name on various occasions, being known as "Villa and Rossi", "Villa, Rossi and Nall", "J. T. Jackson", and "Nall, Jackson & Co."  Nall, Jackson & Co., which later opened branches at Merriwagga and Goolgowi, became a mainstay of the Hillston and district community.

A Presbyterian Church was built at Hillston in 1890.

A magistrate was resident at Hillston until 1916, after which the Hay magistrate visited once a month.

Following the First World War, the Hillston area was divided into relatively small rural properties onto which returning soldiers were repatriated under the New South Wales soldier settlement scheme. The railway between Griffith and Hillston was completed in 1923 and large areas of Crown land along the route were made available for selection.

By the end of the 1920s, with the influx of population to the district, the prevailing optimistic mood led to progress and growth at Hillston.  A lighting system was installed at Hillston in 1929. During the same year the old Club House Hotel was replaced by a two-storey building and the Royal Mail Hotel was extended. The firm of Messrs. Parker and Cordato built rows of shops in the township. In early 1931 the Hillston to Roto railway was completed.

In the wake of a land boom during the mid to late-1920s, the reality of marginal nature of the land became manifest and the soldier settlement blocks were found to be too small to be economically viable. The personal and financial hardships experienced during the inter-war decades resulted in many of these families walking off their blocks, and Hillston began to experience a decline.

The wool boom of the 1950s led to reconstruction of the town, and gave new optimism, only to enter a decline again in the 1960s and 1970s.

Until the bitumen sealing of the Kidman Way from Griffith was completed in the early 1970s, the rough dirt road was an effective barrier to communications with other communities. A train service existed until the mid-1970s, but since then there has been no public transport service to Hillston.

In the late 1990s, the introduction of cotton saw a boom period once again which, after a severe drought 2002-07, is again establishing itself.

Hillston has a semi-arid climate with hot summers and relatively cold winters. Climate records have been kept for Hillston since 1881. Temperature extremes are quite marked over the full year: the average maximum temperature in January is 33.4 degrees Celsius and the average minimum temperature in July is 3.8 degrees Celsius. The highest temperature recorded at Hillston was 46.0 °C (114.8 °F) on 1 January 2006; the lowest recorded was −5.0 °C (23.0 °F) on 3 August 2014. The average annual rainfall is 367.0 millimetres (14.45 in). 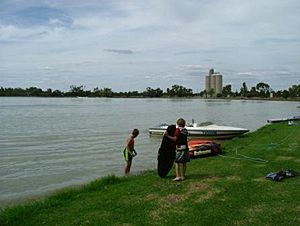 Town facilities include Lake Woorabinda, a man-made lake for water-skiing encircled by a scenic walking track between the river and the lake, community hall for sport and cultural events, and an art gallery in the main street.

Between Lake Woorabinda and the community hall lie a 25m public swimming pool and the Lions' Park, which incorporates children's play equipment and a barbecue area.

All content from Kiddle encyclopedia articles (including the article images and facts) can be freely used under Attribution-ShareAlike license, unless stated otherwise. Cite this article:
Hillston, New South Wales Facts for Kids. Kiddle Encyclopedia.