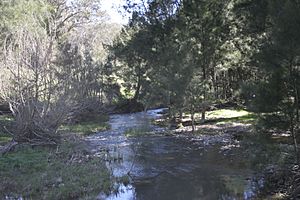 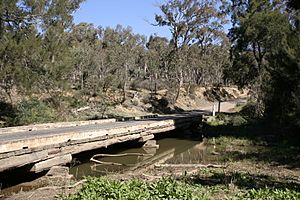 The Abercrombie River is a river in New South Wales, Australia. It flows west from Mount Werong to the Wyangala Dam near Cowra. The river is a tributary of the Lachlan, which it joins at Wyangala lake.

The first people to live alongside the river were Aborigines of the Wiradjuri and Gundungara tribes. They may have used the river as a trading route. The first European to visit the river was explorer Charles Throsby on 5 May 1819, during an expedition from Sydney to the Central West of New South Wales. Alluvial gold was discovered in and along the river in 1851. This started a small gold rush. It was difficult to find gold because of the rough terrain, and changing water levels in the river. Early miners found up to 3 oz (85 g) of gold a day along the river. By 1862 about 45 mining parties were working at Milburne Creek, a minor tributary of the Abercrombie. It is the furthest east of the inland flowing rivers.

All content from Kiddle encyclopedia articles (including the article images and facts) can be freely used under Attribution-ShareAlike license, unless stated otherwise. Cite this article:
Abercrombie River Facts for Kids. Kiddle Encyclopedia.