Franco Zeffirelli, KBE (born 12 February 1923; died 15 June 2019) is an Italian director and producer of movies and television. He is also a opera director and designer of Italian operas.

He was also known for several of the movies he directed, especially the 1968 version of Romeo and Juliet, for which he received an Academy Award nomination. His 1967 version of The Taming of the Shrew with Elizabeth Taylor and Richard Burton remains the best-known film adaptation of that play as well. His miniseries Jesus of Nazareth (1977) won acclaim and is still shown on Christmas and Easter in many countries.

He is a former senator of Catania (1994–2001). His political party was the Forza Italia party.

He received an honorary knighthood from the British government in 2004 when he was created a Knight Commander of the Order of the British Empire.

Zeffirelli was born Gianfranco Zeffirelli on 12 February 1923 in Florence, Italy. 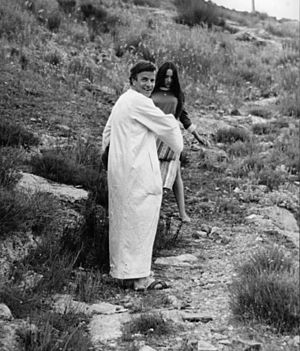 Zeffirelli with Olivia Hussey while filming Romeo and Juliet in 1967

All content from Kiddle encyclopedia articles (including the article images and facts) can be freely used under Attribution-ShareAlike license, unless stated otherwise. Cite this article:
Franco Zeffirelli Facts for Kids. Kiddle Encyclopedia.