The Sydney Town Hall is a late 19th-century heritage-listed town hall building in the city of Sydney, the capital city of New South Wales, Australia, housing the chambers of the Lord Mayor of Sydney, council offices, and venues for meetings and functions. It is located at 483 George Street, in the Sydney central business district opposite the Queen Victoria Building and alongside St Andrew's Cathedral. Sited above the Town Hall station and between the city shopping and entertainment precincts, the steps of the Town Hall are a popular meeting place.

It was designed by John H. Wilson, Edward Bell, Albert Bond, Thomas Sapsford, John Hennessy and George McRae and built from 1869 to 1889 by Kelly and McLeod, Smith and Bennett, McLeod and Noble, J. Stewart and Co. It is also known as Town Hall, Centennial Hall, Main Hall, Peace Hall, Great Hall and Old Burial Ground. The Town Hall is listed on the (now defunct) Register of the National Estate and the New South Wales State Heritage Register and is part of the heritage-listed Town Hall precinct which includes the Queen Victoria Building, St Andrew's Cathedral, the Gresham Hotel and the former Bank of New South Wales. In latter years, it has been discovered that Town Hall lies on top of part of a cemetery complex. Renovations were undertaken in 2008-9 primarily to upgrade the mechanical, hydraulic, electrical and communication services within the building. The renovations, completed by Kell & Rigby, included removing 6,000 cubic metres (210,000 cu ft) of sandstone from underneath the building. 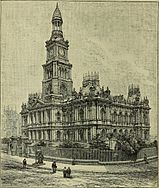 The Town Hall was built from local Sydney sandstone in the grand Victorian Second Empire style, inspired by the French Second Empire Hotel de Ville in Paris. The Town Hall has been described as having "lavishly ornamented composition with focal tower and fanciful roofs". The building consists of the original Town Hall, mayoral suites and town clerk's offices. These were designed by J. H. Wilson in 1866, having won a civic competition to design a town hall for the rapidly-growing city. Construction of his initial designs were completed under the architectural direction of Albert Bond in 1869. Wilson also designed the interior of the original Town Hall meeting room. The clock tower was completed in 1873 to the design of E. and T. Bradbridge and whose clock was installed in 1884. The Centennial Hall and associated offices and entrances were designed by Thomas H. Sapsford in 1883, but after his death were completed by architects David McBeath, John Hennessy and George McRae in 1889.

The building houses the Sydney City Council Chamber, reception rooms, the Centennial Hall and offices for the Lord Mayor and elected councillors.

The Centennial Hall contains the Grand Organ, the world's largest pipe organ with tubular pneumatic action, built from 1886 to 1889 and installed in 1890 by the English firm of William Hill & Son. The organ possesses one of only two full-length 64′ organ stops in the world (the Contra-Trombone in the pedal). Before the opening of the Sydney Opera House and its Concert Hall, the Town Hall was Sydney's premier concert hall, and many notable performances took place there.

In the later years, it has been discovered that Town Hall lies on top of part of a cemetery complex. Renovations were undertaken in 2008-9 primarily to upgrade the mechanical, hydraulic, electrical and communication services within the building. The renovations, completed by Sydney builder Kell & Rigby, included removing 6,000 cubic metres (210,000 cu ft) of sandstone from underneath the building.

The Sydney Town Hall still serves as an important presence and meeting place for the city of Sydney to this very day. The building itself regularly undergoes cleaning and restoration to preserve it for future generations. Additionally, it has been rendered with sustainability by improving energy efficiency, including smart light sensors, energy efficient lighting, new roofing insulation to moderate building temperature, solar panels, and new hydraulics and storm water infrastructure.

All content from Kiddle encyclopedia articles (including the article images and facts) can be freely used under Attribution-ShareAlike license, unless stated otherwise. Cite this article:
Sydney Town Hall Facts for Kids. Kiddle Encyclopedia.