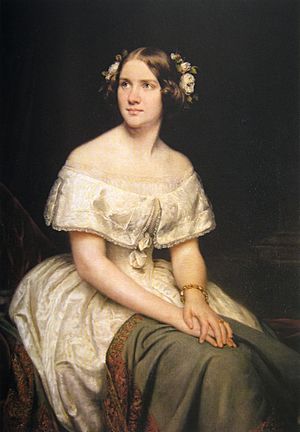 Jenny Lind (Johanna Maria Lind, Stockholm, 6 October 1820 – Wynd's Point, Herefordshire, 2 November 1887) was a Swedish opera singer. She was nicknamed the "Swedish Nightingale". She was in great demand in opera roles throughout Sweden and northern Europe during the 1840s, and became the protégée of Felix Mendelssohn. After two acclaimed seasons in London, she announced her retirement from opera at the age of 29.

In 1850, Lind went to America at the invitation of the showman P. T. Barnum. She gave 93 concerts for him and then continued to tour under her own management. She donated her proceeds to charities, mainly the endowment of free schools in Sweden. With her husband, Otto Goldschmidt, she returned to Europe in 1852. They had three children. She gave occasional concerts over the next two decades, settling in England in 1855. From 1882, for some years, she was a professor of singing at the Royal College of Music in London. She was the inspiration for Hans Christian Andersen's "The Nightingale". Lind died on 2 November 1887 in Herefordshire, England, of cancer. She is buried in the Great Malvern Cemetery.

All content from Kiddle encyclopedia articles (including the article images and facts) can be freely used under Attribution-ShareAlike license, unless stated otherwise. Cite this article:
Jenny Lind Facts for Kids. Kiddle Encyclopedia.