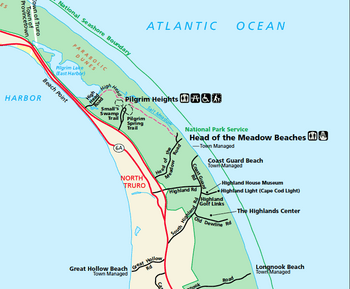 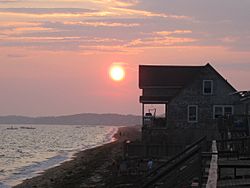 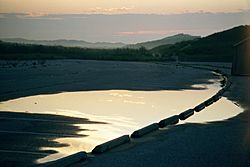 Early evening at Head of the Meadow beach, North Truro

Over half of the land area of the town is part of the Cape Cod National Seashore (the area shown in green on the map), established in 1961 by President John F. Kennedy, and administered by the U.S. National Park Service.

From December, 1969 until early 1970, North Truro was the location of Operation Have Horn, the launching of sounding rockets under project Nike-Hydac. On completion of the operation, the used devices were returned to the White Sands Missile Range. These experiments were conducted at the now closed North Truro Air Force Station.

North Truro is also home to Highland Links Golf Course, Massachusetts's oldest links course. The course runs along the highland cliffs on the Atlantic coast, and encompasses the Highland Light.

All content from Kiddle encyclopedia articles (including the article images and facts) can be freely used under Attribution-ShareAlike license, unless stated otherwise. Cite this article:
North Truro, Massachusetts Facts for Kids. Kiddle Encyclopedia.