Temple of Artemis facts for kids 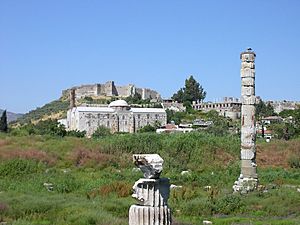 The site of the Temple of Artemis at Ephesus in Turkey.

The Temple of Artemis or Artemision (Greek: Ἀρτεμίσιον; Turkish: Artemis Tapınağı), also known less precisely as the Temple of Diana, was a Greek temple dedicated to an ancient, local form of the goddess Artemis (associated with Diana, a Roman goddess). It was located in Ephesus (near the modern town of Selçuk in present-day Turkey). It was completely rebuilt twice, once after a devastating flood and three hundred years later after an act of arson, and in its final form was one of the Seven Wonders of the Ancient World. By 401 AD it had been ruined or destroyed. Only foundations and fragments of the last temple remain at the site.

The earliest version of the temple (a temenos) dates to the Bronze Age. Callimachus, in his Hymn to Artemis, attributed it to the Amazons. In the 7th century BC, it was destroyed by a flood. Its reconstruction, in more grandiose form, began around 550 BC, under Chersiphron, the Cretan architect, and his son Metagenes. The project was funded by Croesus of Lydia, and took 10 years to complete. This version of the temple was destroyed in 356 BC by Herostratus in an act of arson.

The next, greatest and last form of the temple, funded by the Ephesians themselves, is described in Antipater of Sidon's list of the world's Seven Wonders:

I have set eyes on the wall of lofty Babylon on which is a road for chariots, and the statue of Zeus by the Alpheus, and the hanging gardens, and the colossus of the Sun, and the huge labour of the high pyramids, and the vast tomb of Mausolus; but when I saw the house of Artemis that mounted to the clouds, those other marvels lost their brilliancy, and I said, "Lo, apart from Olympus, the Sun never looked on aught so grand". 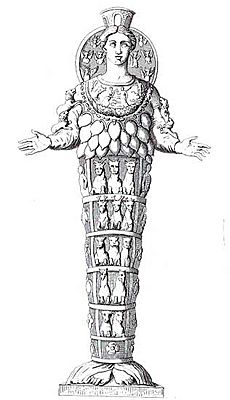 The Temple of Artemis was near the ancient city of Ephesus, about 50 km south from the modern port city of İzmir, in Turkey.

Most of the description of the Temple of Artemis comes from Pliny, though there are different accounts that give different sizes.

Pliny said the temple was 115 meters long and 55 meters wide. He said it was made almost completely of marble. It was about three times as big as the Parthenon by area. The Temple has 127 Ionic-styled columns. Each is 17.5 meters in height.

The Temple of Artemis had many fine artworks. Bronze sculptures by famous Greek sculptors Polyclitus, Pheidias, Cresilas, and Phradmon were in the temple. Paintings and gilded columns of gold and silver were also in it. The sculptors often competed at creating the best sculpture. Many of these sculptures were of Amazons, who are said to have founded the city of Ephesus.

Pliny said that Scopas, who also worked on the Mausoleum of Mausollos, worked carved reliefs into the temple's columns.

Athenagoras of Athens names Endoeus, a student of Daedalus, as the sculptor of the main statue of Artemis in Ephesus.

The Temple of Artemis was at a flourishing region. It was used as a religious institute. Merchants and travellers came to it from all over Asia Minor. The temple was influenced by many beliefs. It can be seen as a symbol of faith for many different peoples. The Ephesians worshiped Cybele. They joined many of their beliefs into the worship of Artemis. Artemisian Cybele became very different from the Roman goddess Diana. The cult of Artemis attracted thousands of worshipers from far-off lands. They all gathered at the site and worshipped her.

All content from Kiddle encyclopedia articles (including the article images and facts) can be freely used under Attribution-ShareAlike license, unless stated otherwise. Cite this article:
Temple of Artemis Facts for Kids. Kiddle Encyclopedia.