Agen is a commune in southwestern France, in the region of Nouvelle-Aquitaine. It is the prefecture of the Lot-et-Garonne department and the capital of the arrondissement of Agen.

The Agenais, the region where is the commune, is a natural region of the old province of Aquitaine, now in Nouvelle-Aquitaine.

Agen is in the southeast of the Lot-et-Garonne department, on the right (eastern) side of the Garonne river and close to the Canal de Garonne. The city is at about 115 km (71 mi) from Toulouse and 140 km (87 mi) from Bordeaux.

The inhabitants of Agen are known, in French, as Agenais (women: Agenaises).

Evolution of the population in Agen 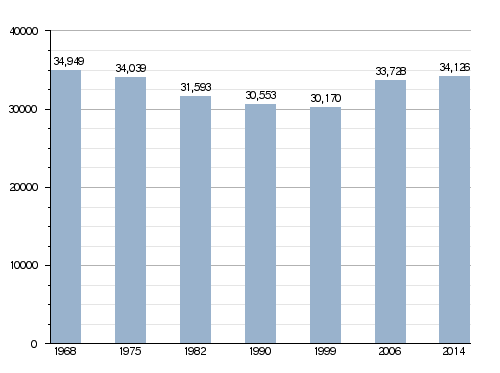 Agen is the prefecture of the Lot-et-Garonne department since 1790. It is also the capital of the arrondissement of Agen and the administrative centre (French: chef-lieu) of 4 cantons:

Agen is twinned with:

Agen is the "capital of the prune", a local produce sold as a sweet (stuffed with prune purée) or as an after-dinner delight (prunes soaked in Armagnac – a type of brandy). Every September, the Prune festival organizes rock concerts, circuses and prune tasting.

All content from Kiddle encyclopedia articles (including the article images and facts) can be freely used under Attribution-ShareAlike license, unless stated otherwise. Cite this article:
Agen Facts for Kids. Kiddle Encyclopedia.