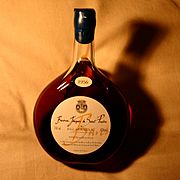 A bottle of Armagnac

Armagnac is a kind of brandy produced in the Armagnac region of France. The region lies between the Adour and Garonne rivers in the foothills of the Pyrenees. The area contains 15,000 hectares (37,000 acres) of grape-producing vines. It was given an AOC in 1936.

Column stills rather than pot stills are used in the production of Armagnac. It is then aged in oak barrels. Armagnac is the oldest brandy distilled in France. In the past was consumed for its therapeutic benefits. In the 14th century, Prior Vital Du Four, a Cardinal, claimed it had 40 virtues:

All content from Kiddle encyclopedia articles (including the article images and facts) can be freely used under Attribution-ShareAlike license, unless stated otherwise. Cite this article:
Armagnac (brandy) Facts for Kids. Kiddle Encyclopedia.