The Adour (Basque: Aturri, Occitan: Ador) is a river in southwestern France that flows through the Occitanie and Nouvelle-Aquitaine regions.

It rises in the Pyrenees, at the Arbizon mountain, and flows into the Atlantic Ocean (Bay of Biscay) near Bayonne.

The Adour river is born, as Adour de Payolle, at the north side of the Arbizon mountain. In the Campan valley, that is formed by three smaller valleys corresponding to the sources of the three Adours (Adour de Payolle, Adour de Gripp and the Adour de Lesponne), these small rivers meet at Campan (Arrondissement of Bagnères-de-Bigorre) to form the Adour river.

The Adour flows north for almost a hundred miles through the Hautes-Pyrénées to Gers. There, it turned to the west and gets into the Landes department. In Port-de-Lanne, the Adour is joined by the Gaves réunis river and, finally, it flows into the Bay of Biscay, in the Atlantic Ocean, between Anglet (Pyrénées-Atlantiques) and Tarnos (Landes).

Tributaries of the Adour

Some of the important tributaries (longer than 50 km) of the Adour are:

Départements and towns found along the Adour river are:

The average yearly discharge (volume of water which passes through a section of the river per unit of time) for the Adour river is 86.60 m3/s (3,058 cu ft/s) at Saint-Vincent-de-Paul in the Landes department. 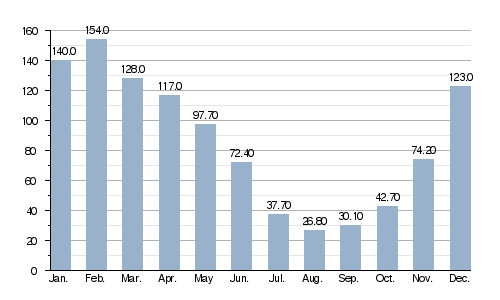 The Adour shows typical seasonal fluctuations. The highest levels of the river are in winter and spring, from December to May inclusive, with the highest level in February. They are followed by a rapid fall in the flow during the low water period that goes from July to October.

All content from Kiddle encyclopedia articles (including the article images and facts) can be freely used under Attribution-ShareAlike license, unless stated otherwise. Cite this article:
Adour Facts for Kids. Kiddle Encyclopedia.