Hautes-Pyrénées (Occitan: Nauts Pirenèus / Hauts Pirenèus) is a department in the southwest of France. It is part of the Occitanie region and its main city is Tarbes.

Hautes-Pyrénées is one of the original 83 departments created during the French Revolution on 4 March 1790. It was created with parts of the former province of Gascony; these parts were the old province of Bigorre and the Pays des Quatre-Vallées.

Hautes-Pyrénées has an area of 4,464 km2 (1,724 sq mi), or 0.81% of the country. It is part of the Occitanie region and has two small territorial exclaves—a remnant from the Middle Ages—located within the neighboring département of Pyrénées-Atlantiques.

The department is surrounded by 2 regions and 3 departments:

and by Spain (the province of Huesca) to the south. 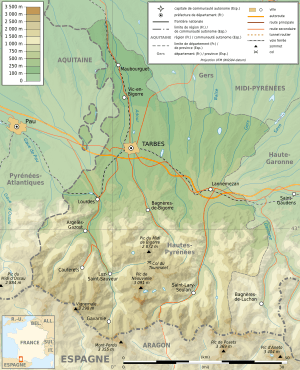 Map of the Hautes-Pyrénées

Three natural regions can be distinguished in the department.

The Pyrénées, along the border with Spain, cover the southern half of the department, with 66% of the department. They form a natural barrier between France and Spain. More than 30 mountains here are over 3,000 m (9,800 ft) high.

The second region of the Hautes-Pyrénées, with 17% of the territory, consists of chains low hills.

The third region, in the northern part of the department, is the plain of the Adour river and consists of largely flat agricultural land.

The main river of the department is the Adour river that flows through the cities of Tarbes and Bagnères-de-Bigorre. Other rivers are the Gave de Pau and the Neste.

Hautes-Pyrénées has two small territorial exclaves—a remnant from the Middle Ages—within the neighboring département of Pyrénées-Atlantiques.

The climate of the department is an oceanic climate with relatively hot summers, mild winters and abundant rainfall, Cfb in the Köppen climate classification.

The département is managed by the Departamental Council of the Haute-Garonne in Tarbes. The Hautes-Pyrénées is part of the region of Occitanie.

There are 3 arrondissements (districts), 17 cantons and 470 communes (municipalities) in the Hautes-Pyrénées.

The following is a list of the 17 cantons of the Hautes-Pyrénées department, following the French canton reorganisation which came into effect in March 2015:

The inhabitants of Hautes-Pyrénées are known, in French, as Haut-Pyrénéens (women: Haut-Pyrénéennes). They are also known as the Bigourdans.

The city with more people living in it is the capital, Tarbes (40,900), followed by Lourdes (14,361). The subprefectures of Argelès-Gazost and Bagnères-de-Bigorre have, respectively, 3,020 and 7,602 inhabitants.

Evolution of the population in Hautes-Pyrénées

The cities with more than 4,000 inhabitants in the department are: 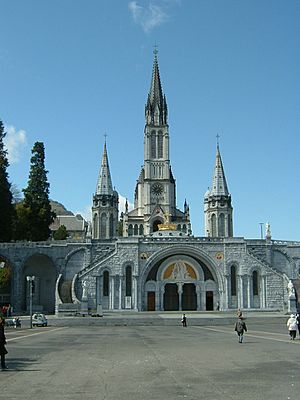 All content from Kiddle encyclopedia articles (including the article images and facts) can be freely used under Attribution-ShareAlike license, unless stated otherwise. Cite this article:
Hautes-Pyrénées Facts for Kids. Kiddle Encyclopedia.