Pyrénées-Atlantiques (Gascon: Pirenèus-Atlantics; Basque: Pirinio-Atlantiarrak or Pirinio-Atlantikoak) is a department in the Nouvelle-Aquitaine region of France. It takes its name from the Pyrenees mountains and the Atlantic Ocean.

Pyrénées-Atlantiques is one of the 83 French departments made during the French revolution, on 4 March 1790, with the name of Basses-Pyrénées. It was created from parts of the old provinces of Guyenne, Béarn, and Gascony.

On 10 October 1969, the name of the department was changed from Basses-Pyrénées to Pyrénées-Atlantiques. 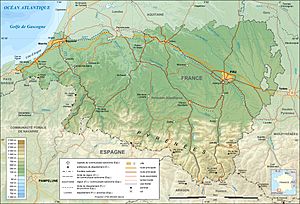 Map of the Pyrénées-Atlantiques

Pyrénées-Atlantiques is part of the Nouvelle-Aquitaine region, southwestern France, and is the 10th French department in area with 7,644.8 km2 (2,952 sq mi).

There are two small territorial enclaves—a remnant from the Middle Ages— that are part of the neighboring Hautes-Pyrénées department.

and by Spain to the south and the Bay of Biscay (Atlantic Ocean) to the west.

The Pyrenees mountain range is found in the southern part of the department and goes, east to west, from the Col d'Aubisque, a mountain pass 30 km (19 mi) south of Tarbes and Pau, to the mouth of the river Bidasoa.

The main river of the department is the Adour and all rivers in the department, except for some coastal small rivers, flow into this river. Other important rivers are the Gaves réunis, formed by the rivers Gave d'Oloron and Gave de Pau, and the Nive.

There are 3 arrondissements (districts), 27 cantons and 547 communes (municipalities) in the Pyrénées-Atlantiques.

The following is a list of the 27 cantons of the Pyrénées-Atlantiques department, following the French canton reorganisation which came into effect in March 2015:

The city with more people living in it is the capital, Pau (77,575). The subprefectures of Bayonne and Oloron-Sainte-Marie have, respectively, 47,492 and 10,794 inhabitants. 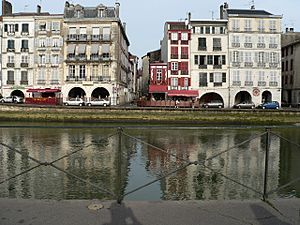 Petit Bayonne, a view across the Nive River

All content from Kiddle encyclopedia articles (including the article images and facts) can be freely used under Attribution-ShareAlike license, unless stated otherwise. Cite this article:
Pyrénées-Atlantiques Facts for Kids. Kiddle Encyclopedia.