It is the second largest metropolitan area of the old Midi-Pyrénées region, after Toulouse.

The city is named for the first time during the 5th century like Civitas Turba ubi castrum Bigorra. It is also an important city of the Novempopulania. Gregory of Tours, in the 7th century, called the city as Talvam vicum. 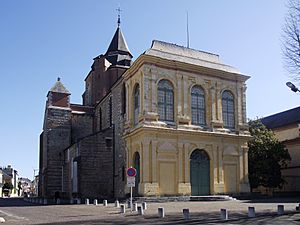 A small town founded in the 3rd century B.C. became a Roman colony under the name of Tarba. It was destroyed by the Vikings in 840 and rebuilt by the Bishop of Bigorre or Tarbes.

From the twelfth century on, Tarbes became the capital of the County of Bigorre. During the religious wars, the cathedral was burnt in 1569 by Protestants but the bishop had it rebuilt in 1652.

In 1790, Tarbes became the capital of the new department of Hautes-Pyrénées.

Two rivers flow through the city: the Adour by the east and the Échez by the west.

The following municipalities (communes) are around Tarbes:

Tarbes has an oceanic climate with relatively hot summers, mild winters and abundant rainfall, Cfb in the Köppen climate classification.

The inhabitants of Tarbes are known, in French, as Tarbais (women: Tarbaises).

Evolution of the population in Tarbes

Tarbes is the prefecture of the Hautes-Pyrénées department since 1790. It is also the capital of three Cantons:

Tarbes is twinned with:

The Gare de Tarbes railway station offers direct connections with Paris, Bordeaux, Toulouse, Bayonne and other cities in the region. There is a motorway that connects Tarbes with Bayonne and Toulouse. Tarbes is also served by the small Tarbes-Lourdes-Pyrénées Airport situated 10 kilometers away of the city centre.

All content from Kiddle encyclopedia articles (including the article images and facts) can be freely used under Attribution-ShareAlike license, unless stated otherwise. Cite this article:
Tarbes Facts for Kids. Kiddle Encyclopedia.