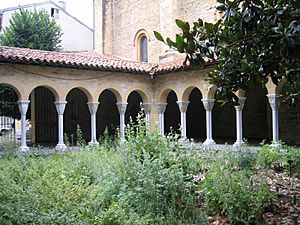 Garden in the cloister of Saint-Gaudens

In antiquity, the present place of the city was near a Roman road between Toulouse and Dax, where there was a rural area called Mansus; Mansus was named later as Mas Saint-Pierre after the Christianization of the region.

In 475, a young Christian boy, Gaudens, was killed by the Visigoths and he was buried in this place. The town took its current name in the ninth century, because may people came here to worship the martyr; the relics of Gaudens were deposited in the church of Mas-Saint-Pierre.

As an important regional market place, Saint-Gaudens became the economic capital of the Comminges (a natural region and an old French region on the hills at the base of the Pyrenees).

The city of Saint-Gaudens is in the Comminges, at the foot of the Pyrenees. It is about 90 km (56 mi) to the southwest of Toulouse and at about 70 km (43 mi) from Tarbes (Hautes-Pyrénées).

It is found on the left side of the Garonne river.

The climate of Saint-Gaudens, in the Köppen climate classification, is Cfb - Oceanic climate with template summers. 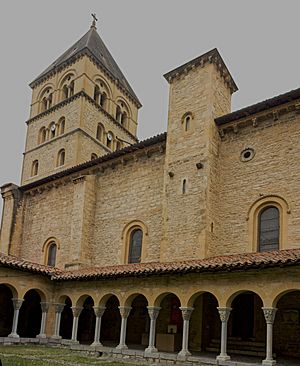 Evolution of the population in Saint-Gaudens

Saint-Gaudens is twinned with:

Some important buildings are:

All content from Kiddle encyclopedia articles (including the article images and facts) can be freely used under Attribution-ShareAlike license, unless stated otherwise. Cite this article:
Saint-Gaudens, Haute-Garonne Facts for Kids. Kiddle Encyclopedia.