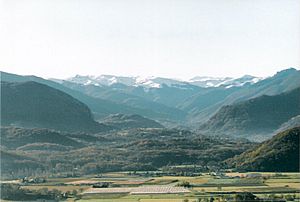 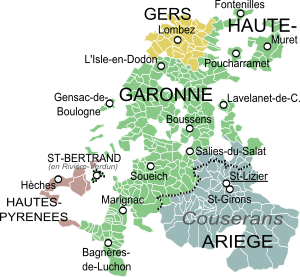 The former county of Comminges ~ as seen on a modern map.

The Comminges is a natural region in southern France, near the Pyrenees. It contains the upper valley of the Garonne, one of France's four great rivers. It is one of the oldest inhabited places in France. Before the French Revolution it was a county of the historical region of Gascony. It was named for the ancient tribe the Convenae. They were a Celtic tribe living in and around Saint-Bertrand-de-Comminges by at least the 1st century BC.

The valley of the Comminges

All content from Kiddle encyclopedia articles (including the article images and facts) can be freely used under Attribution-ShareAlike license, unless stated otherwise. Cite this article:
Comminges Facts for Kids. Kiddle Encyclopedia.