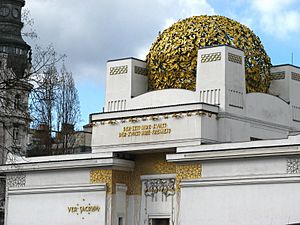 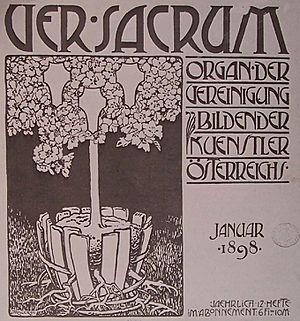 Magazin of the Secession

The Vienna Secession (also known as the Union of Austrian Artists, or Vereinigung Bildender Künstler Österreichs) was formed in 1897 by a group of Austrian artists who left the Association of Austrian Artists, housed in the Vienna Künstlerhaus due to its conservatism. This movement included painters, sculptors, and architects. The first president of the Secession was Gustav Klimt, and Rudolf von Alt was made honorary president.

It was founded on 3 April 1897 by artists Gustav Klimt, Koloman Moser, Josef Hoffmann, Joseph Maria Olbrich, Max Kurzweil, and others. Although the architect Otto Wagner is one of the most important members he was not a founding member. The first exhibition was held in 1898. In 1898, the group's exhibition house was built near Karlsplatz. It was designed by Joseph Maria Olbrich, the exhibition building soon became known simply as "the Secession" (die Sezession). Their work was also published in a magazin called "Ver sacrum".

1903 Josef Hoffmann and Koloman Moser founded the Wiener Werkstätten, a union of artists who wanted to reform the applied arts (arts and crafts). 1905 Klimt and other artists left the group due to different opinions about art.

All content from Kiddle encyclopedia articles (including the article images and facts) can be freely used under Attribution-ShareAlike license, unless stated otherwise. Cite this article:
Vienna Secession Facts for Kids. Kiddle Encyclopedia.