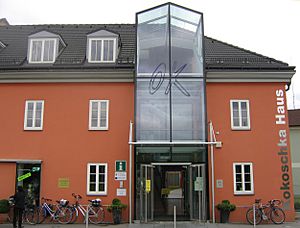 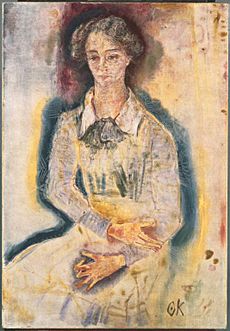 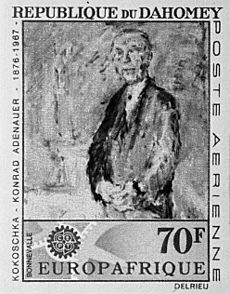 Postage stamp of Konrad Adenauer after a painting by Oskar Kokoschka

Oskar Kokoschka (1 March 1886 - 22 February 1980) was an Austrian artist, poet and playwright. He is best known for his intense expressionistic portraits and landscapes.

Kokoschka's first jobs were postcards and drawings for children. In his early career he did portraits of Viennese celebrities. He was in the Austrian army in World War I and was wounded. At the hospital, the doctors said he was mentally unstable. He traveled across Europe and painted the landscape.

Kokoschka had an affair with Alma Mahler. She stopped the relationship. He continued to love her his entire life. One of his greatest works The Bride of the Wind (The Tempest), is a tribute to her. His poem Allos Markar was about this relationship.

Deemed a degenerate by the Nazis, Kokoschka left Austria in 1934 for Prague. In 1938, when the Czechs were coming for Wehrmacht, he fled to the United Kingdom. He stayed there during the war.

Kokoschka became a British citizen in 1946. In 1978 he got back Austrian citizenship. He traveled to the United States in 1947. Then he moved to Switzerland. He lived there the rest of his life. He died in Montreux.

Kokoschka's literary works are as odd and interesting as his art. His memoir, A Sea Ringed with Visions, is as wildly psychedelic as anything written by others under the influence of actual hallucinogens. His short play "Murderer, the Hope of Women" is often called the first Expressionist drama. His Orpheus und Eurydike (1918) became an opera by Ernst Krenek.

All content from Kiddle encyclopedia articles (including the article images and facts) can be freely used under Attribution-ShareAlike license, unless stated otherwise. Cite this article:
Oskar Kokoschka Facts for Kids. Kiddle Encyclopedia.