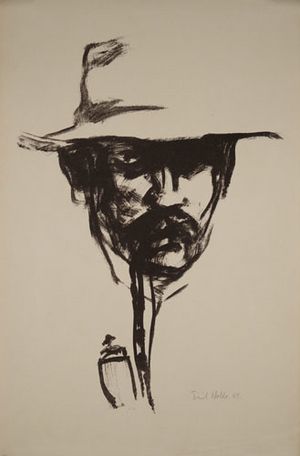 Head with Pipe (Self Portrait), 1907, lithograph 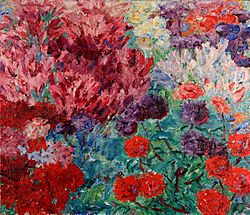 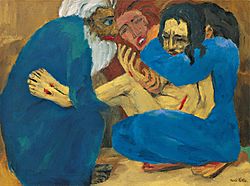 Emil Nolde (born Hans Emil Hansen; 7 August 1867 – 13 April 1956) was a German-Danish painter and printmaker. He was one of the first Expressionists, a member of Die Brücke, and was one of the first oil painting and watercolor painters of the early 20th century to explore color. He is known for his brushwork and expressive choice of colors. Golden yellows and deep reds appear frequently in his work, giving a luminous quality to otherwise somber tones. His watercolors include vivid, brooding storm-scapes and brilliant florals.

Nolde's intense preoccupation with the subject of flowers reflected his interest in the art of Vincent van Gogh. 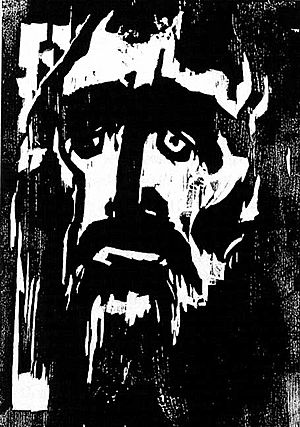 Emil Nolde was born as Hans Emil Hansen, near the village of Nolde (since 1920 part of the municipality of Burkal in Southern Jutland, Denmark), in the Prussian Duchy of Schleswig. He grew up on a farm. His parents, devout Protestants, were Danish and Frisian peasants. He realized his unsuitability for farm life, and that he and his three brothers were not at all alike. Between 1884 and 1891, he studied to become a woodcarver and illustrator in Flensburg, and worked in furniture factories as a young adult. He spent his years of travel in Munich, Karlsruhe and Berlin.

In 1889, he gained entrance into the School of Applied Arts in Karlsruhe. He was a drawing instructor at the school of the Museum of Industrial and Applied Arts (Industrie- und Gewerbemuseum; today the Textilmuseum, or Textile Museum) in St. Gallen, Switzerland, from 1892 to 1898. He eventually left this job to finally pursue his dream of becoming an independent artist. As a child he had loved to paint and draw, but he was already 31 by the time he pursued this new career. When he was rejected by the Munich Academy of Fine Arts in 1898, he spent the next three years taking private painting classes, visiting Paris, and becoming familiar with the contemporary impressionist scene that was popular at this time. He married Danish actress Ada Vilstrup in 1902, and moved to Berlin, where he would meet collector Gustav Schiefler and artist Karl Schmidt-Rottluff, both of whom would advocate his work later in life. From that year, he called himself after his birthplace.

He became a member of the revolutionary expressionist group Die Brücke (The Bridge), of Dresden, in 1906, upon the group's invitation. This association lasted only until the end of the following year. He was a member of the Berlin Secession from 1908 to 1910, but was then excluded owing to a disagreement with the leadership. He exhibited with Kandinsky's Munich-based group Der Blaue Reiter (The Blue Rider) in 1912; by this time he had achieved some fame, and was able to support himself through his art.

Nolde was a supporter of the National Socialist German Workers' Party from the early 1920s, having become a member of its Danish section. He expressed anti-semitic, negative opinions about Jewish artists, and considered Expressionism to be a distinctively Germanic style. This view was shared by some other members of the Nazi party, notably Joseph Goebbels and Fritz Hippler.

However, Adolf Hitler rejected all forms of modernism as "degenerate art", and the Nazi regime officially condemned Nolde's work. Until that time he had been held in great esteem in Germany. A total of 1,052 of his works were removed from museums, more than those of any other artist. Some were included in the Entartete Kunst exhibition of 1937, despite his protests, including (later) a personal appeal to Nazi Gauleiter Baldur von Schirach in Vienna. He was not allowed to paint—even in private—after 1941. Nevertheless, during this period he created hundreds of watercolors, which he hid. He called them the "Unpainted Pictures".

There is silver blue, sky blue and thunder blue. Every color holds within it a soul, which makes me happy or repels me, and which acts as a stimulus. To a person who has no art in him, colors are colors, tones tones...and that is all. All their consequences for the human spirit, which range between heaven to hell, just go unnoticed.

While acknowledging his success as a brilliant colourist, greater awareness of Nolde's commitment to National Socialism and a discussion of the relationship between his politics, denunciation of non-Jewish adversaries as Jews, and his art is considered in more recent scholarship.

He died in Seebüll (now part of Neukirchen).

Nolde's work is exhibited at major museums around the world, including Portrait of a Young Woman and a Child, Portrait of a Man (c. 1926), and Portrait of a Young Girl (1913–1914) at the Hermitage Museum, Saint Petersburg, Russia; and Prophet (1921) and Young Couple (1913) at the Museum of Modern Art, New York City. His most important print, The Prophet (1912), is an icon of 20th-century art.

Nolde's work has become the focus of renewed attention after a painting entitled Blumengarten (Utenwarf) from 1917, which now hangs in the art museum Moderna Museet, Stockholm, Sweden, and has been valued at US$4,000,000, was discovered to have been looted from Otto Nathan Deutsch, a German-Jewish refugee whose heirs, including a Holocaust survivor, are asking for its return. The Swedish government decided in 2007 that the museum must settle with the heirs. Deutsch was forced to flee Germany before World War II and left for Amsterdam in late 1938 or early 1939. The painting was sold to the Swedish museum at an auction in Switzerland, where it had resurfaced in 1967. Other important works:

In recent years, Nolde's paintings have achieved prices of several million US dollars, in auctions conducted by the leading international auction houses. On 8 February 2012, Blumengarten (ohne Figur) was sold by Sotheby's in London for US$3,272,673.

All content from Kiddle encyclopedia articles (including the article images and facts) can be freely used under Attribution-ShareAlike license, unless stated otherwise. Cite this article:
Emil Nolde Facts for Kids. Kiddle Encyclopedia.