This is a listing of characters from the Nickelodeon animated television series Hey Arnold! 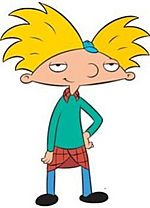 Contrary to popular belief, Arnold does not wear a kilt but instead dons a plaid shirt that hangs out of his teal sweater and a hat that only covers a small part of his football-shaped head.

Arnold Phillip Shortman (voiced by J.D. Daniels in the pilot, Toran Caudell in season 1, Phillip Van Dyke in seasons 2–3, Spencer Klein in season 4, 17 out of 20 episodes in season 5, and Hey Arnold! The Movie, Rusty Flood as a young toddler in "Helga on the Couch", Alex D. Linz 3 out of 20 episodes from season 5, "April Fools Day" and "The Journal", and Mason Vale Cotton in Hey Arnold! The Jungle Movie) is the title character of the series. He is a 9-year-old dreamer and an idealist who is wise beyond his years, and he always tries to see the best in people and do the right thing. His parents, Miles and Stella, left to go to San Lorenzo when he was almost 2 years old but never came back to Hillwood. Whenever he sees someone in trouble, especially Helga, Arnold goes out of his way to help them out, even if it's not sensible to do so. Arnold often acts as the stable center to those around him, whether he's around his "family" in his paternal grandparents' boarding house, or around his friends at school. He lives in Sunset Arms boarding house with his grandparents, Phil and Gertrude.

Arnold has had two major crushes in the series; one on sixth-grader Ruth McDougal (through most of season 1) and one on a classmate named Lila Sawyer (from season 3-5). However, his most catalytic relationship is with his classmate and frenemy Helga Pataki. Helga is secretly in love with him, though to keep these feelings secret she bullies Arnold. Arnold is completely unaware of this fact for most of the series, other than the occasional hint from Helga and other classmates. Helga revealed her secret to Arnold during Hey Arnold! The Movie, but Arnold gave Helga the opportunity to take back her confession, attributing it to "the heat of the moment". In the made-for-TV sequel Hey Arnold! The Jungle Movie, Arnold returns Helga's feelings with a kiss of his own, after thanking Helga for her help in finding his parents and using her locket to help activate the device that releases the cure to the sleeping sickness which his parents had contracted before they could release the cure. It's also implied at the end of the movie that he and Helga become a couple, as Arnold holds hands with Helga (although Helga pretends to be hostile to Arnold at once in public). Arnold is friends with most of his fellow fourth-graders, with his best friend being Gerald Johanssen, whose friendship dates as far back as preschool.

Arnold's surname is never revealed on the show, and the mystery surrounding his full name became a running gag on the show. In several episodes, characters would come close to revealing his last name, only to be cut off for various reasons (e.g. being interrupted, being drowned out, being unable to read it due to poor handwriting, etc.). Craig Bartlett eventually revealed that his full name is "Arnold Phillip Shortman", which is confirmed in The Jungle Movie. The long-standing running gag of Grandpa Phil calling him "Short Man" was apparently meant to foreshadow this fact. 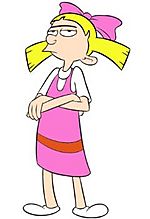 Helga Pataki in her signature pink and red dress and pink bow.

Helga Geraldine Pataki (voiced by Francesca Marie Smith; voiced by Katie Bartlett as a toddler in "Helga on the Couch") is a 9-10 year old rough and cynical girl who puts on a mean, rude, deceitful, tomboyish front. She is often portrayed as the local bully and recurring antagonist of the series, which was Arnold's arch-rival yet love interest. She constantly bullies Arnold and other people, but yet loves him, which is obsessive to the point where she has made many shrines dedicated to him. She is an academically-gifted student and a talented writer of poetry for her age. She despises Arnold because he is a good influence and his football-head is different from most others. She becomes the villain in some episodes and occasionally expresses interest in pursuing the latter as a career. The reason of this is because she is neglected by her parents and often disrespectfully calls them by their first names because she does not think they are worthy of being called "Mom" and "Dad". Her mother, Miriam, is usually depressed, forgetful, struggling to stay conscious, and frequently drinking "smoothies" and "coffee". Helga relates very poorly to her. Her father, Bob, a successful pager salesman, who suffers from workaholism, rarely notices her existence, favoring her over-achieving, neurotic college-aged sister Olga, who Helga rarely gets along with. He never listens to Helga. Helga is also known for her catchword, "criminy!", which she normally exclaims when stressed.

Helga resents her older sister Olga, a perfectionist in her young adulthood. Although Helga will do her best to avoid unnecessary contact with Olga, she has shown feelings of love for her sister from time to time, as in the episode "Olga Gets Engaged", when she intervenes on Olga's behalf, saving her from what would have been a bad marriage, and "Big Sis" when she reveals her jealousy of Olga's relationship with Lila. In the episode "Quality Time" it's revealed that she hates corn and is allergic to strawberries because they give her hives.

In The Jungle Movie, she is shown to have an extensive video library of Arnold which she and Phoebe convince Gerald to use for the contest for the class field trip that Arnold hoped to win to search for his parents, which proves successful. During the trip, Helga attempts to express her true feelings to Arnold who was not in the right frame of mind to hear it at the time and left abruptly leaving Helga heartbroken to the point she ripped up the picture of Arnold in her locket which she discards along with the fragments in the river. She briefly becomes angry at Arnold though after the class is captured by Lasombra and she sees Arnold crying while looking at a picture of his parents she forgives him and reaches for her locket only for her to remember she discarded it but finds that it and Arnold's torn picture was recovered and repaired by Brainy. She convinces Gerald in helping her free Arnold so they could reach the Green Eyes before Lasombra got there first. Together with Arnold and Gerald, they manage to find the Green Eyes. Helga also comes up with the idea to use her locket to replace the Corazon which was lost while they were struggling with Lasombra, which activates the mechanism to release the cure to the sleeping sickness curing the afflicted Green Eyes and Arnold's parents. While she was attempting to retrieve her locket Arnold thanked her for all she did and returns her feelings, resulting in them kissing, only to be interrupted by Gerald. At the end of the movie while it is implied that she and Arnold are now a couple, she reverted to her old ways when Arnold tried to hold her hand on the way to school with Gerald and Phoebe but secretly liked that Arnold made that attempt, and Arnold, now knowing how she thinks, is content to go along with it; she is only feigning hostility towards him in public to maintain her tough girl reputation.

Series creator Craig Bartlett revealed in a 2018 interview that Helga's appearance was inspired in part by a young Frida Kahlo.

Gerald Martin Johanssen (voiced by Jamil Walker Smith throughout the original series and Hey Arnold! The Movie, and Benjamin Flores Jr. in Hey Arnold! The Jungle Movie) is a 9-10 year old African-American boy and Arnold's best friend. He is an athletic and street-smart boy who is portrayed as loyal, though much less responsible than Arnold. Gerald has known Arnold for many years, most likely since preschool. Besides being Arnold's friend, Gerald also has a good deal of knowledge of many legendary stories in the city, or "urban legends" as he calls them. He apparently gets these myths from a source he has nicknamed "Fuzzy Slippers", mentioned in many episodes as his reliable assistant.

At school, Gerald is the class president, and considers himself very cool, and apparently, so do his friends. When it was revealed that Arnold was on Rhonda's so-called "Cool List", and that Gerald was on her other list known as "The Geek List" (due to a grudge Rhonda had against him over running for class president), many classmates were surprised to find this out ("Cool Party").

His most distinct features are his tall, Kid 'n Play-style hair, and his shirt with the number 33 on it (he also wears 33 on sports uniforms). He has a crush on Phoebe, who shares the same feelings for him. It's implied that at the end of Hey Arnold!: The Jungle Movie that the two have become a couple as they are seen holding hands.

Other students of PS 118

All content from Kiddle encyclopedia articles (including the article images and facts) can be freely used under Attribution-ShareAlike license, unless stated otherwise. Cite this article:
List of Hey Arnold! characters Facts for Kids. Kiddle Encyclopedia.