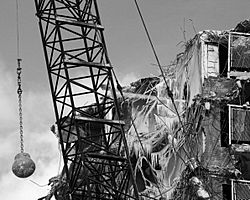 Demolition is a process in which buildings are torn down. Demolition is different from deconstruction, which is carefully taking a building apart to reuse its parts. For small buildings, such as houses, demolition is often simple. Buildings are often pulled down with excavators, bulldozers or small cranes. Other specialized equipment may also be used. Larger buildings may use a wrecking ball swung by a crane. This works well for masonry buildings. Sometimes building implosion is used. This involves using carefully placed explosive charges. If done correctly, the building falls in on itself and not on nearby buildings.

Demolition of a chimney at the former brewery "Henninger" in Frankfurt am Main, Germany, on 2 December 2006

The demolition of the New Haven Coliseum in New Haven, Connecticut

Large buildings, tall chimneys, smokestacks, bridges, and increasingly some smaller structures may be destroyed by building implosion using explosives. Imploding a structure is very fast—the collapse itself only takes seconds—and an expert can ensure that the structure falls into its own footprint, so as not to damage neighboring structures. This is essential for tall structures in dense urban areas.

Any error can be disastrous, however, and some demolitions have failed, severely damaging neighboring structures. One significant danger is from flying debris, which, when improperly prepared for, can kill onlookers.

Another dangerous scenario is the partial failure of an attempted implosion. When a building fails to collapse completely the structure may be unstable, tilting at a dangerous angle, and filled with un-detonated but still primed explosives, making it difficult for workers to approach safely.

A third danger comes from air overpressure that occurs during the implosion. If the sky is clear, the shock wave, a wave of energy and sound, travels upwards and disperses, but if cloud coverage is low, the shock wave can travel outwards, breaking windows or causing other damage to surrounding buildings.

Stephanie Kegley of CST Environmental described shock waves by saying, "The shock wave is like a water hose. If you put your hand in front of the water as it comes out, it fans to all sides. When cloud coverage is below 1,200 feet, it reacts like the hand in front of the hose. The wave from the shock fans out instead of up toward the sky."

Controlled implosion, being spectacular, is the method that the general public often thinks of when discussing demolition; however, it can be dangerous and is only used as a last resort when other methods are impractical or too costly. The destruction of large buildings has become increasingly common as the massive housing projects of the 1960s and 1970s are being leveled around the world. At 439 feet (134 m) and 2,200,000 square feet (200,000 m2), the J. L. Hudson Department Store and Addition is the tallest steel framed building and largest single structure ever imploded.

It takes several weeks or months to prepare a building for implosion. All items of value, such as copper wiring, are stripped from a building. Some materials must be removed, such as glass that can form deadly projectiles, and insulation that can scatter over a wide area. Non-load bearing partitions and drywall are removed. Selected columns on floors where explosives will be set are drilled and high explosives such as nitroglycerin, TNT, RDX, or C4 are placed in the holes. Smaller columns and walls are wrapped in detonating cord. The goal is to use as little explosive as possible so that the structure will fail in a progressive collapse therefore only a few floors are rigged with explosives, so that it is safer (fewer explosives) and costs less. The areas with explosives are covered in thick geotextile fabric and fencing to absorb flying debris. Far more time-consuming than the demolition itself is the clean-up of the site, as the debris is loaded into trucks and hauled away.

A new approach to demolition is the deconstruction of a building with the goal of minimizing the amount of materials going to landfills. This "green" approach is applied by removing the materials by type material and segregating them for reuse or recycling. With proper planning this approach has resulted in landfill diversion rates that exceed 90% of an entire building and its contents in some cases. It also vastly reduces the CO2 emissions of the removing of a building in comparison to demolition.

The development of plant and equipment has allowed for the easier segregation of demolition waste types on site and the reuse within the construction of the replacement building. On site crushers allow the demolished concrete to be reused as type 1 crushed aggregate either as a piling mat for ground stabilization or as aggregate in the mixing of concrete.

Timber waste can be shredded using specialist timber shredders and composted, or used to form manufactured timber boards, such as MDF or chipboard.

Safety is paramount; a site safety officer is usually assigned to each project to enforce all safety rules and regulations.

Demolition of the last grain elevator in Mendham, Saskatchewan, June 2009

There is a small niche of companies that offer diamond wire sawing and similar services for a more precise demolition option, these companies include cti, penhall, and Bluegrass companies

All content from Kiddle encyclopedia articles (including the article images and facts) can be freely used under Attribution-ShareAlike license, unless stated otherwise. Cite this article:
Demolition Facts for Kids. Kiddle Encyclopedia.