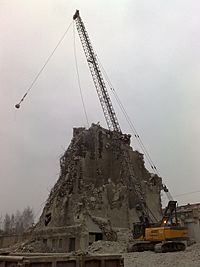 A wrecking ball used to destroy an old building

A wrecking ball is a heavy steel ball used for demolishing large buildings. It is usually hung from a crane. A crane operator swings the ball back and forth like a pendulum. It works best tearing down masonry buildings. Early round shapes would sometimes get stuck in walls and roofs. The modern wrecking ball is pear-shaped to avoid this problem. It is not clear when the wrecking ball was invented. They were commonly in use by 1936 in New York City. Today they are no longer used as much in demolition. The wrecking ball has largely been replaced by the more efficient High reach excavator. "Think of a long-reach excavator as a demolition scalpel, compared to the mallet of a wrecking ball".

All content from Kiddle encyclopedia articles (including the article images and facts) can be freely used under Attribution-ShareAlike license, unless stated otherwise. Cite this article:
Wrecking ball Facts for Kids. Kiddle Encyclopedia.