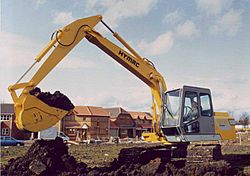 An Excavator (sometimes called a backhoe or digger) is a piece of heavy construction equipment. Excavators are used to dig in the ground or to move large objects. At the base of the machine, it usually has two tracks to move it. Above the tracks is a platform that rotates (180° or 360° degrees). The operator sits in a cab and controls the excavator. One set of controls moves the machine forward and backward. Another set of controls operates the arm and the tilting bucket. hydraulic fluid, hydraulic cylinders and hydraulic motors control the machine.

Excavators come in different sizes based on the type of work they do. Some are cable-operated excavators. Some also use wheels instead of tracks. 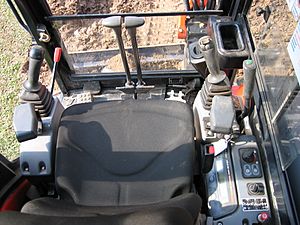 Dashboard and controls of a 3.8 tons excavator

Excavators are used in many ways:

All content from Kiddle encyclopedia articles (including the article images and facts) can be freely used under Attribution-ShareAlike license, unless stated otherwise. Cite this article:
Excavator Facts for Kids. Kiddle Encyclopedia.