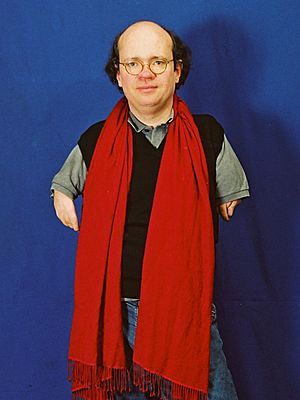 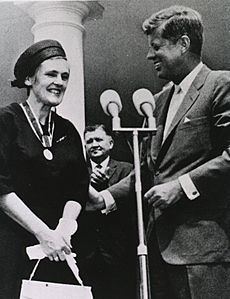 Thalidomide is a drug. It was used as a sedative. It also had uses for other illnesses.

It was mainly prescribed to pregnant women in the 1950s and 1960s, to help with sleep, until it was found to be a teratogen (that is: birth deformity causing substance). The drug can cause birth defects in rats, primates and humans. Before the drug was released, not enough tests were done, so this was unknown. About 10,000 children were born with deformities, between 1956, and 1962. These could be directly linked to the fact that their mothers had taken the drug during their pregnancy. After this discovery, more rigorous tests were required in the United States, before a drug can be said to be safe to take during pregnancy. Other countries made similar laws. Thalidomide was not used as a drug for decades.

Researchers continued to look for ways to use the drug. They discovered that it had good effects on certain types of skin diseases, associated with leprosy. Currently, studies are being done to see how this drug could help with cancer treatment, as well as some other, less-known diseases. It has been used in Multiple myeloma treatment with success.

All content from Kiddle encyclopedia articles (including the article images and facts) can be freely used under Attribution-ShareAlike license, unless stated otherwise. Cite this article:
Thalidomide Facts for Kids. Kiddle Encyclopedia.