Kids Encyclopedia Facts
This page is about the 20th-century artist. For the Elizabethan philosopher, see Francis Bacon. 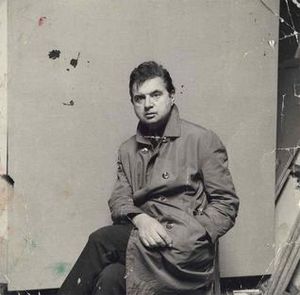 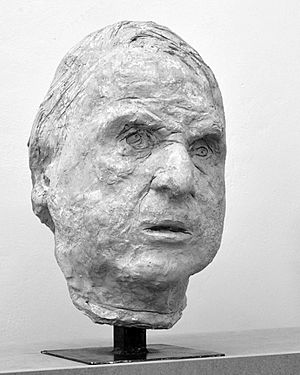 Bacon is best known for his depictions of popes, crucifixions, and portraits of close friends. His abstracted figures are typically isolated in geometrical cages which give them vague 3D depth, set against flat, nondescript backgrounds.

Bacon took up painting in his twenties, having drifted in the late 1920s and early 1930s as an interior decorator, bon vivant and gambler.

Since his death Bacon's reputation and market value have grown steadily, and his work is among the most acclaimed, expensive and sought-after. In the late 1990s a number of major works, previously assumed destroyed, including early 1950s popes and 1960s portraits, reemerged to set record prices at auction. In 2013 his Three Studies of Lucian Freud set the world record as the most expensive piece of art sold at auction.

All content from Kiddle encyclopedia articles (including the article images and facts) can be freely used under Attribution-ShareAlike license, unless stated otherwise. Cite this article:
Francis Bacon (artist) Facts for Kids. Kiddle Encyclopedia.