Honoré-Victorin Daumier ( February 26, 1808 – February 10, 1879) was a French printmaker, caricaturist, painter, and sculptor, whose many works offer commentary on social and political life in France in the 19th century.

Daumier produced more than 500 paintings, 4000 lithographs, 1000 wood engravings, 1000 drawings and 100 sculptures. A prolific draughtsman, he was perhaps best known for his caricatures of political figures and satires on the behavior of his countrymen, although posthumously the value of his painting has also been recognized.

Daumier was born in Marseille to Jean-Baptiste Louis Daumier and Cécile Catherine Philippe. His father Jean-Baptiste was a glazier whose literary aspirations led him to move to Paris in 1814, seeking to be published as a poet. In 1816, the young Daumier and his mother followed Jean-Baptiste to Paris. Daumier showed in his youth an irresistible inclination towards the artistic profession, which his father vainly tried to check by placing him first with a huissier, for whom he was employed as an errand boy, and later, with a bookseller. In 1822, he became protégé to Alexandre Lenoir, a friend of Daumier's father who was an artist and archaeologist. The following year Daumier entered the Académie Suisse. He also worked for a lithographer and publisher named Belliard, and made his first attempts at lithography.

Having mastered the techniques of lithography, Daumier began his artistic career by producing plates for music publishers, and illustrations for advertisements. This was followed by anonymous work for publishers, in which he emulated the style of Charlet and displayed considerable enthusiasm for the Napoleonic legend. After the revolution of 1830 he created art which expressed his political beliefs. Daumier was almost blind by 1873. 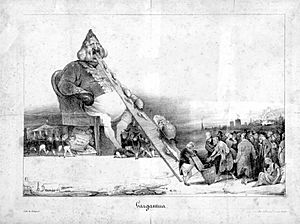 A lithograph of Daumier's Gargantua, 1831

During the reign of Louis Philippe, Charles Philipon launched the comic journal, La Caricature. Daumier joined its staff, which included such powerful artists as Devéria, Raffet and Grandville, and started upon his pictorial campaign of satire, targeting the foibles of the bourgeoisie, the corruption of the law and the incompetence of a blundering government. His caricature of the king as Gargantua led to Daumier's imprisonment for six months at Ste Pelagie in 1832. Soon after, the publication of La Caricature was discontinued, but Philipon provided a new field for Daumier's activity when he founded the Le Charivari.

Daumier produced his social caricatures for Le Charivari, in which he held bourgeois society up to ridicule in the figure of Robert Macaire, hero of a popular melodrama. In another series, L'histoire ancienne, he took aim at the constraining pseudo-classicism of the art of the period. In 1848 Daumier embarked again on his political campaign, still in the service of Le Charivari, which he left in 1863 and rejoined in 1864.

Around the mid-1840s Daumier started publishing his famous caricatures depicting members of the legal profession, known as 'Les Gens de Justice', a scathing satire about judges, defendants, attorneys and corrupt, greedy lawyers in general. A number of extremely rare albums appeared on white paper, covering 39 different legal themes, of which 37 had previously been published in the Charivari. It is said that Daumier's own experience as an employee in a bailiff's office during his youth may have influenced his rather negative attitude towards the legal profession.

In 1834 he produced the lithograph Rue Transnonain, 15 April 1834 depicting the massacre in the rue transnoin which was part of the April 1834 riots in Paris. It was designed for the subscription publication L’Association Mensuelle. The profits were to promote freedom of the press and defrayed legal costs of a lawsuit against the satirical, politically progressive journal Le Charivari to which Daumier contributed regularly. The police discovered the print hanging in the window of printseller Ernest Jean Aubert in the Galerie Véro-Dodat (passageway in 1st arrondissement) and subsequently tracked down and confiscated as many of the prints they could find, along with the original lithographic stone on which the image was drawn. Existing prints of Rue Transnonain are survivors of this effort.

Daumier was not only a prolific lithographer, draftsman and painter, but he also produced a notable number of sculptures in unbaked clay. In order to save these rare specimens from destruction, some of these busts were reproduced first in plaster. Bronze sculptures were posthumously produced from the plaster. The major 20th-century foundries were F. Barbedienne Barbedienne, Rudier [fr], Siot-Decauville [fr] and Foundry Valsuani [fr].

Eventually Daumier produced between 36 busts of French members of Parliament in unbaked clay. The foundries involved from 1927 on to produce a bronze edition were Barbedienne in an edition of 25 & 30 casts and Valsuani with three special casts based on the previous plaster castings from the gallery Sagot - Le Garrec clay collection. These bronze busts are all posthumous, based on the original, but frequently restored unbaked clay sculptures. The clay in its restored version can be seen at the Musée d'Orsay in Paris.

From the early 1950s on, some baked clay 'Figurines' appeared, most of them belonging to the Gobin collection in Paris. It was Gobin who decided to have a bronze cast done by Valsuani in an edition of 30 each. Again, they were posthumous and there is no proof, in contrast to the busts mentioned above, that these terra cotta figurines really were done by Daumier himself. The American school (J.Wasserman from the Fogg-Harvard Museum) doubts their authenticity, while the French school, especially Gobin, Lecomte, and Le Garrec and Cherpin, all somehow involved in the marketing of the bronze editions, are sure of their Daumier origin. The Daumier Register (the international center of Daumier research) as well as the National Gallery of Art in Washington DC would consider the figurines as 'in the manner of Daumier' or even 'by an imitator of Daumier' (NGA)

There can be no doubt about the authenticity of Daumier's Ratapoil and his Emigrants. The self-portrait in bronze as well as the bust of Louis XIV have been frequently debated over the last 100 years, but the general tenor is to accept them as originals by Daumier.

Daumier created many figurines that he subsequently used as models for his paintings. One of Daumier's most well-known figurines, titled The Heavy Burden, features a woman and her child. The woman is carrying something, possibly a large bag; the figurine is about 14 inches tall. Oliver W. Larkin states that "One sees in the clay the mark of Daumier's swift fingers as he nudged the skirt into windblown folds and used a knife blade or the end of a brush handle to define the clasped arms and the wrinkles of the cloth over the breast. In oil, he could only approximate this small masterpiece most successfully in two canvases were once owned by Arsene Alexandre."

Daumier made several paintings of The Heavy Burden. The woman and her child look like they are being pushed by the wind, and Daumier used this as a metaphor of the greater forces they were actually fighting against. The greater forces that Daumier wanted to show that they were trying to fight were the Revolution, the government, and poverty. The woman and her child in the painting are outlined by a very dark shadow. 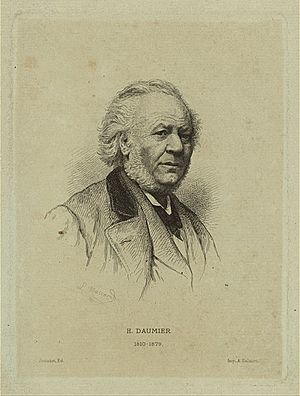 Daumier later in his career

In addition to his prodigious activity in the field of caricature—the list of Daumier's lithographed plates compiled in 1904 numbers no fewer than 3,958—he also painted. Except for the searching truthfulness of his vision and the powerful directness of his brushwork, it would be difficult to recognize the creator of Robert Macaire, of Les Bas bleus, Les Bohémiens de Paris, and the Masques, in the paintings of Christ and His Apostles (Rijksmuseum in Amsterdam), or in his Good Samaritan, Don Quixote and Sancho Panza, Christ Mocked, or even in the sketches in the Ionides Collection at South Kensington. There is a room-full of caricatures in the museum Am Römerholz in Winterthur. Don Quixote and Sancho Panza was found as part of the 2012 Munich Art Hoard.

As a painter, Daumier was one of the pioneers of realistic subjects, which he treated with a point of view critical of class distinctions. His paintings did not meet with success until 1878, a year before his death, when Paul Durand-Ruel collected his works for exhibition at his galleries and demonstrated the range of the talent of the man who has been called the "Michelangelo of caricature". At the time of the exhibition, Daumier was blind and living in a cottage at Valmondois, which Corot placed at his disposal. It was there that he died. 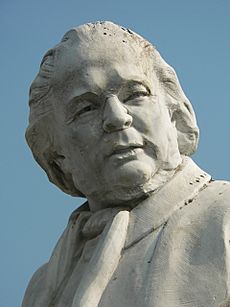 Baudelaire noted of him: l'un des hommes les plus importants, je ne dirai pas seulement de la caricature, mais encore de l'art moderne. (One of the most important men, not only, I would say, in caricature, but also in modern art.)

An exhibition of his works was held at the École des Beaux-Arts in 1901.

Daumier's works are found in many of the world's leading art museums, including the Louvre, the Metropolitan Museum of Art and the Rijksmuseum. He is celebrated for a range of works, including a large number of paintings (500) and drawings (1000) some of them depicting the life of Don Quijote, a theme that fascinated him for the last part of his life.

Daumier's 200th birthday was celebrated in 2008 with a number of exhibitions in Asia, America, Australia and Europe.

All content from Kiddle encyclopedia articles (including the article images and facts) can be freely used under Attribution-ShareAlike license, unless stated otherwise. Cite this article:
Honoré Daumier Facts for Kids. Kiddle Encyclopedia.