The Milwaukee Art Museum (MAM) is an art museum in Milwaukee, Wisconsin. Its collection contains nearly 25,000 works of art, making it one of the largest museums in the world. 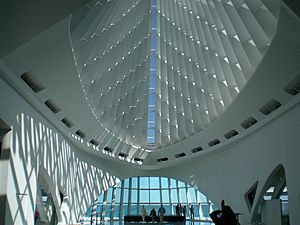 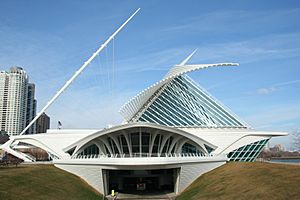 Milwaukee Art Museum from the south

Beginning around 1872, multiple organizations were founded in order to bring an art gallery to Milwaukee, as the city was still a growing port town with little or no facilities to hold major art exhibitions. Over the span of at least nine years, all attempts to build a major art gallery had failed. Shortly after that year, Alexander Mitchell donated all of his collection to constructing Milwaukee's first permanent art gallery in the city's history.

In 1888, the Milwaukee Art Association was created by a group of German panorama artists and local businessmen. The same year, British-born businessman Frederick Layton built, endowed and provided artwork for the Layton Art Gallery, now demolished. In 1911, the Milwaukee Art Institute, another building constructed to hold other exhibitions and collections, was completed, adjacent to the Layton Art Gallery.

The Milwaukee Art Museum was founded in 1888 and is purported to be Milwaukee's first art gallery. That claim is disputed by the Layton Art Gallery, which opened the same year.

In the latter half of the 20th century, the museum came to include the War Memorial Center in 1957 as well as the brutalist Kahler Building (1975) designed by David Kahler and the Quadracci Pavilion (2001) created by Spanish architect Santiago Calatrava.

The Quadracci Pavilion contains a movable, wing-like brise soleil that opens up for a wingspan of 217 feet (66 m) during the day, folding over the tall, arched structure at night or during inclement weather. The pavilion received the 2004 Outstanding Structure Award from the International Association for Bridge and Structural Engineering. This iconic building, often referred to as "the Calatrava", is used in the museum logo.

In November 2015, the museum opened a $34 million expansion funded jointly by a museum capital campaign and by Milwaukee County. The new building, the Shields Building, designed by Milwaukee architect James Shields of HGA, provides an additional 30,000 square feet for art, including a section devoted to light-based media, photography, and video installation. The building includes a new atrium and lakefront-facing entry point for visitors and was designed with cantilevered elements and concrete columns to complement, respectively, the existing Calatrava and Kahler structures on the site. The final design emerged after a lengthy process that included the main architect's departure because of design disputes and his return to the project.

The museum houses nearly 25,000 works of art housed on four floors, with works from antiquity to the present. Included in the collection are 15th- to 20th-century European and 17th- to 20th-century American paintings, sculpture, prints, drawings, decorative arts, photographs, and folk and self-taught art. Among the best in the collection are the museum's holding of American decorative arts, German Expressionism, folk and Haitian art, and American art after 1960.

As of 2015, the museum’s endowment is around $65 million. Endowment proceeds cover a fraction of the museum's expenses, leaving it overly dependent on funds from day-to-day operations such as ticket sales. Daniel Keegan, who has served as the museum's director since 2008, negotiated an agreement with Milwaukee County and the Milwaukee County War Memorial for the long-term management and funding of the facilities in 2013.

All content from Kiddle encyclopedia articles (including the article images and facts) can be freely used under Attribution-ShareAlike license, unless stated otherwise. Cite this article:
Milwaukee Art Museum Facts for Kids. Kiddle Encyclopedia.