Milwaukee County is located in the U.S. state of Wisconsin. As of the 2010 census, the population was 947,735 and was estimated to be 945,016 in 2020. It is both the most populous and most densely populated county in Wisconsin, and the 45th most populous county nationwide; Milwaukee, its eponymous county seat, is also the most populous city in the state. The county was created in 1834 as part of Michigan Territory and organized the following year.

Portions of what is now Milwaukee County are known to have been inhabited by a number of Native American tribes, including the Sauk, Meskwaki or "Fox", Menomonee, Ojibwe and Potawotami, with elements of other tribes attested as well.

In 1818, when the land later to be Wisconsin was made part of Michigan Territory, territorial governor Lewis Cass created Brown County, which at that time included all the land now part of Milwaukee County. It remained a part of Brown county until 1834, when Milwaukee County was created, including the area south of the line between townships eleven and twelve north (i.e., the northern boundary of Washington and Ozaukee counties), west of Lake Michigan, north of Illinois, and east of the line which now separates Green and Rock counties. This territory encompassed all of what are now Milwaukee, Jefferson, Kenosha, Ozaukee, Racine, Rock, Walworth, Washington, and Waukesha counties, as well as large parts of the present-day Columbia, Dane and Dodge counties. 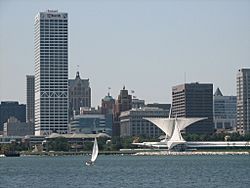 All content from Kiddle encyclopedia articles (including the article images and facts) can be freely used under Attribution-ShareAlike license, unless stated otherwise. Cite this article:
Milwaukee County, Wisconsin Facts for Kids. Kiddle Encyclopedia.