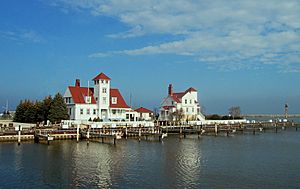 The mouth of the Root River, Racine, Wisconsin 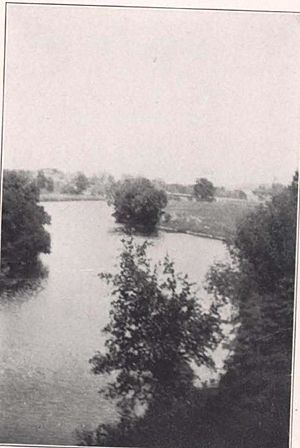 The Root River is a 43.7-mile-long (70.3 km) river that flows to Lake Michigan at the city of Racine in southeastern Wisconsin in the United States. Racine and Racine County are named for the river, as racine is the French word for root.

The Root River rises in the Waukesha County suburb of New Berlin and flows generally southeastwardly through the Milwaukee County suburbs of West Allis, Greenfield, Greendale and Franklin, into Racine County, where it enters Lake Michigan at Racine. 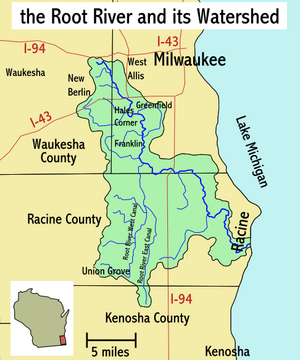 Root River and its watershed

According to the Geographic Names Information System, the Root River has also been known historically as:

There was at one time a hamlet in Greenfield called Root Creek on the bank of what was locally called "Root Creek" rather than "Root River".

All content from Kiddle encyclopedia articles (including the article images and facts) can be freely used under Attribution-ShareAlike license, unless stated otherwise. Cite this article:
Root River (Wisconsin) Facts for Kids. Kiddle Encyclopedia.