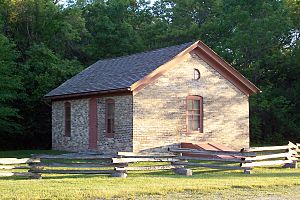 Greenfield is a city in Milwaukee County, Wisconsin, United States. A suburb of Milwaukee, Greenfield is one of many bedroom communities in the Milwaukee metropolitan area. The population was 36,720 at the 2010 census.

On February 19, 1841, the name of the town was changed to Greenfield, taking its name from the name of the Post Office in the Town of Kinnickinnic. Greenfield was the final municipality in Milwaukee County to incorporate, and was the final municipality to leave the Town form of government in 1957. This was done to prevent total annexation by the City of Milwaukee. Before 1957, Milwaukee slowly nibbled away at Greenfield's land.

All content from Kiddle encyclopedia articles (including the article images and facts) can be freely used under Attribution-ShareAlike license, unless stated otherwise. Cite this article:
Greenfield, Wisconsin Facts for Kids. Kiddle Encyclopedia.