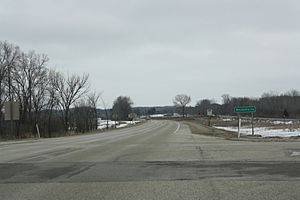 Waukesha County is a county in the U.S. state of Wisconsin. As of the 2010 census, the population was 389,891, making it the third-most populous county in Wisconsin. Its county seat is Waukesha.

The part of Wisconsin that Waukesha County occupies was a part of Michigan Territory when Milwaukee County was organized in September 1834. On July 4, 1836, the Wisconsin Territory was formed, which included land that is now in the state of Minnesota. In January 1846, part of Milwaukee County was split off into Waukesha County. Curtis Reed was the first county chairman. When a vote decided the county seat, Waukesha defeated Pewaukee by two votes. The name is derived from the Potawatomi word for 'fox' because the streams in the lower part of the county drain into the Fox River.

Waukesha was a New England settlement, and Waukesha's founders were settlers from New England, particularly Connecticut, rural Massachusetts, Vermont, New Hampshire and Maine, as well as from upstate New York who were born to parents who had migrated there from New England shortly after the American Revolution. These people were "Yankees" descended from the English Puritans who settled New England in the 1600s. They were part of a wave of New England farmers who headed west into what was the wilds of the Northwest Territory during the early 1800s. Most arrived as a result of the completion of the Erie Canal as well as the end of the Black Hawk War.

When they arrived in what is now Waukesha County, there was nothing but dense virgin forest and wild prairie. The New Englanders built farms, roads, government buildings and established post routes. They brought many of their Yankee New England values, such as a passion for education that led to the establishment of many schools as well as staunch support for abolitionism. They were mostly members of the Congregationalist Church, though some were Episcopalian. Due to the second Great Awakening some converted to Methodism, and others became Baptists before moving to what is now Waukesha County. Waukesha, like much of Wisconsin, would be culturally very continuous with early New England culture for most of its early history.

Because of its large number of lakes, the northwestern corner of Waukesha County is referred to as "Lake Country" by local residents. It includes Pewaukee, Delafield, Hartland, Merton, Nashotah, Chenequa, Okauchee Lake, Oconomowoc, Summit, and Lac La Belle. 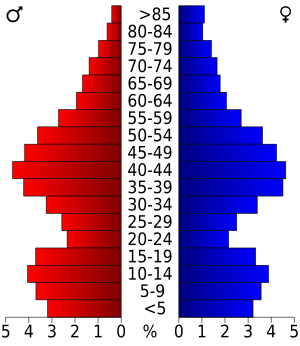 Note – due to a zoning issue, a single acre of Waukesha County was annexed by the City of Milwaukee (which otherwise is fully within Milwaukee County) in 2003 to accommodate the Ambrosia Chocolate Factory.

All content from Kiddle encyclopedia articles (including the article images and facts) can be freely used under Attribution-ShareAlike license, unless stated otherwise. Cite this article:
Waukesha County, Wisconsin Facts for Kids. Kiddle Encyclopedia.