Kids Encyclopedia Facts
This page is about the village. For the adjacent town, see Mukwonago (town), Wisconsin. 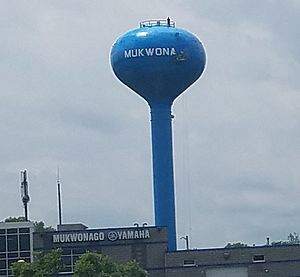 Mukwonago Water Tower in the process of being re-painted (2019)

The area was originally a Native American village and the tribal seat of the Bear Clan of the Potawatomi Indians. The name "Mukwonago" is derived from "mequanego" which translates to bear's den. The spelling "Mukwonago" was adopted in 1844 because of the similarity to nearby Mequon. Many of the streets and roads are named after the city's founders, such as Ira Blood, Major Jessie Meacham. Sewall Andrews, and Thomas Sugden.

It is situated at the southwestern flank of the sprawling Vernon Marsh, and encircles Upper and Lower Phantom Lake(s). The lakes lie midway along the Mukwonago River from its source springs to its meeting with the Fox River, which travels further southeast through Big Bend and beyond.

Mukwonago has a humid continental climate. 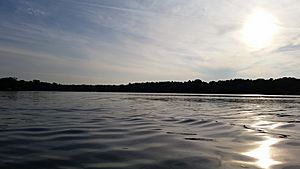 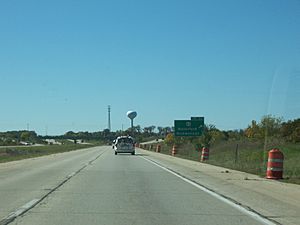 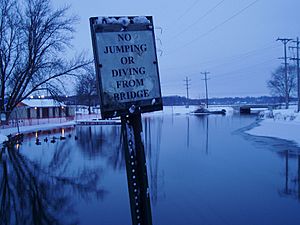 All content from Kiddle encyclopedia articles (including the article images and facts) can be freely used under Attribution-ShareAlike license, unless stated otherwise. Cite this article:
Mukwonago, Wisconsin Facts for Kids. Kiddle Encyclopedia.