Mequon is the largest city in Ozaukee County, in the U.S. state of Wisconsin, and the third-largest city in Wisconsin by land area. Located on Lake Michigan's western shore with significant commercial developments along Interstate 43, the community is a suburb in the Milwaukee metropolitan area. Despite being an incorporated city, approximately half of Mequon's land is undeveloped and agriculture plays a significant role in the local economy. At the time of the 2010 census the population was 23,132.

When the first white settlers arrived in the 1830s, the Mequon area was inhabited by the Menominee, Potawatomi, and Sauk people. In the 1840s, German immigrants settled in the community, building farms and hydropowered mills along the Milwaukee River. Much of the community remained rural, while Thiensville developed as a market town along the local railway, providing services to the farmers. Thiensville incorporated as a village in 1910. Mequon remained rural in the early 20th century but experienced significant population growth during the suburbanization that followed World War II. The community incorporated as a city in 1957 to avoid annexation by the City of Milwaukee. The City of Mequon completely surrounds Thiensville, leading some residents to call Thiensville "Mequon's donut hole." The two municipalities have a close relationship, with a shared chamber of commerce, library, and school district.

Lutheranism has played a significant role in Mequon since the community's early years. Some of the first German settlers were Old Lutherans who founded the Freistadt community – now a neighborhood in western Mequon – in 1839 and went on to form the first Lutheran congregation in Wisconsin. In the 21st century, there are more Lutheran churches in Mequon than churches of any other single denomination. Additionally, Mequon is home to two private Lutheran post-secondary institutions: Concordia University Wisconsin and Wisconsin Lutheran Seminary. In addition to having other Christian denominations, Mequon is the northernmost of Milwaukee's suburbs to have a sizable Jewish community.

The area was originally inhabited by Native Americans; by the early 19th century, the Potawatomi occupied land west of the Milwaukee River, while the Menominee lived between the Milwaukee River and Lake Michigan. European trappers, explorers and traders used the Milwaukee River through the middle of what is now Mequon as a means of transportation. The name "Mequon" is thought to have come from the Native-American word "Emikwaan" or "Miguan," meaning ladle, referring to the shape of the river in the area. The spelling was probably influenced by the French in the area at the time.

Between 1834 and 1836, a surveyor named Brink, along with his assistant Mr. Follett, surveyed the land to create the Town of Mequon. Around this time, settlers came from New York and England, soon followed by German and Irish immigrants. In 1839, a group of immigrants from Saxony settled near the Milwaukee River. In the same year, twenty families from Pomerania founded Freistadt (German: Free city) in the western part of the Town of Mequon. The first Lutheran church in Wisconsin was built by these families in 1840.

Freistadt is a neighborhood of the city of Mequon. The community's name means "free city" in German. Originally in the Town of Mequon, the area was added to the City of Mequon through annexation.

Mequon experiences four distinct seasons, with variation in precipitation and temperature being very wide. The overall climate of the city is moderated by nearby Lake Michigan, which causes temperatures to be cooler in summer and especially spring, and which keeps overnight temperatures warmer in winter. In March and April, the temperature in Mequon can be 10 to 15 degrees Fahrenheit (5 to 8 degrees Celsius) cooler than temperatures in towns just 15 miles (25 kilometers) further from the lake. In December and January, the effect is reversed, with temperatures in inland towns falling much lower.

In Mequon, the warmest month of the year is July, when the high temperature averages 81 °F (27 °C), with low temperatures of approximately 59 °F (15 °C). June and July are the wettest months of the year, with the majority of rain falling in short-lived thunderstorms. January is the coldest month in Mequon, with average high temperatures averaging only 27 °F (-3 °C), and lows averaging 11 °F (-12 °C). February is the driest month, with almost all precipitation falling in the form of snow. In an average winter, 47.0 in (1.3m) of snow falls. The city's proximity to Lake Michigan often increases the snow received by the city. Most of the city's snowfall comes from systems such as Alberta clippers and Panhandle hooks.

There were 8,598 households, of which 32.4% had children under the age of 18 living with them, 68.9% were married couples living together, 5.1% had a female householder with no husband present, 2.4% had a male householder with no wife present, and 23.7% were non-families. 20.3% of all households were made up of individuals, and 11.3% had someone living alone who was 65 years of age or older. The average household size was 2.56 and the average family size was 2.97.

Mequon contains more than two dozen parks and hundreds of acres of community parks and nature preserves operated by the city, and some operated by the county. The Ozaukee Interurban Trail runs for 5.85 miles (9.41 km) south to north through the city. The Mequon-Thiensville Recreation Department conducts classes and programs for children and adults. 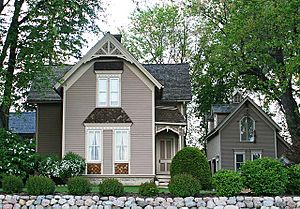 The John Reichert Farmhouse, built in 1885. 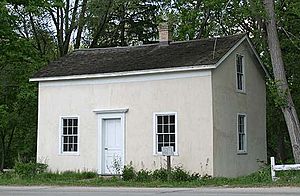 The O'Brien-Peuschel Farmstead, is a National Historic registered site in northwest Mequon.

In 2005, CNN's Money magazine listed Mequon 19th among its 100 Best Small Cities in the United States, ranked jointly with Thiensville, a village surrounded by Mequon.

Located in rural northwest Mequon, the O'Brien-Peuschel Farmstead was settled in 1846 and has extant buildings dating to as early as 1850. It is listed on the National Register of Historic Places. 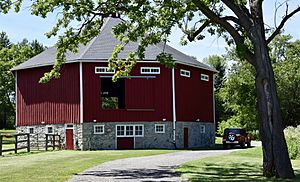 Farmers in eastern Mequon built octagonal barns, believing the shape to be better suited to the winds coming off nearby Lake Michigan. The 1891 Frank Vocke barn is a surviving example of these once-common barns. 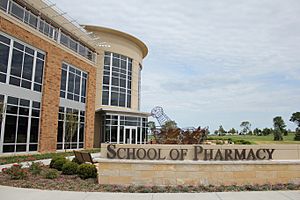 Mequon's economy was primarily agricultural. Some farmsteads from as early as the 1840s and 1850s still stand in the community and are listed on the National Register of Historic Places. The first major businesses were hydropowered mills on the Milwaukee River and other businesses that served local farmers, many of which concentrated in Thiensville.

Beginning in the 1920s, the Nieman and Fromm families began fur farming silver foxes in Mequon. Several companies, including Fromm Bros., Nieman & Co.; Federal Silver Fox Farms, Inc.; Ozaukee Fur Farms Co.; Herbert A. Nieman & Co.; and Cedarburg Fox Farms, Inc. all began operating in Mequon and southern Cedarburg in the 1920s. In 1928, 6600 of the 8841 pelts sold by the New York Auction Co. came from the Fromm and Nieman operations in Wisconsin for a record-breaking sum of $1,021,000. In 1929, the Nieman and Fromm operations broke their own record with auction sales of $1,331,679, making them a leader in the national fur industry. By 1937, the farms were selling 30,000 pelts per year. After World War II, changing consumer tastes caused the farms to begin breeding mink in addition to silver fox. Fur sales declined later in the 20th century, and the Mequon farms sold their last pelts in 1985.

The mid-to-late 20th century saw diversification in Mequon's economy. Retail stores opened to serve the increasingly suburban community, and manufacturers opened plants. In 1983, Concordia University Wisconsin moved from its campus in Milwaukee to a newly acquired campus in Mequon. In 1994, St. Mary's Hospital Ozaukee opened. As of 2015, the two institutions—both located in close proximity to Interstate 43—were among the largest employers in Ozaukee County. Despite the growth of new industries, half of Mequon's land remains undeveloped and agriculture continues to play a significant role in the local economy.

Mequon's public schools are operated by the Mequon-Thiensville School District, except for six square miles (16 km2) in the far northwestern part of Mequon that are served by the Cedarburg School District. The district has three elementary schools, serving grades kindergarten through fifth grade: Donges Bay Elementary, Oriole Lane Elementary, and Wilson Elementary. Each elementary school serves a different neighborhoods of the city. Similarly, the district has two middle schools, each serving students grades six through eight in different areas of the city: Lake Shore Middle School and Steffen Middle School. Homestead High School serves all students grades nine through twelve. In 2009, Homestead was ranked by BusinessWeek magazine as the state's top high school. The school's mascot is a Highlander.

Milwaukee Area Technical College has a satellite campus in Mequon, offering over 20 two-year associate degrees, as well as a variety of technical diplomas and certificates. The Mequon campus can serve as a stepping stone to a bachelor's degree, with some students completing two years of basic education before transferring to a four-year college or university.

Concordia University Wisconsin is a private, co-educational university in eastern Mequon that is part of the Lutheran Church–Missouri Synod's nine-member Concordia University System. The university has a student body of more than 7,000 with over 70 undergraduate majors and minors and 17 graduate programs, including degree programs in CUW's School of Pharmacy, one of only three such schools in the State of Wisconsin.

Wisconsin Lutheran Seminary is also located in Mequon. An all-men's post-secondary theological school with a student body of approximately 125, the seminary trains pastors for the Wisconsin Evangelical Lutheran Synod.

Interstate 43 runs north-south through the City of Mequon with exits 85 and 89 providing access to the municipality.

Unlike some nearby cities and villages, the City of Mequon has large areas of rural and undeveloped land without sidewalks for pedestrian traffic. However, the Ozaukee Interurban Trail for pedestrian and bicycle use runs north-south through the city and connects Mequon to the neighboring community of Cedarburg in the north and Brown Deer in the south, where the trail connects to Milwaukee County's Oak Leaf Trail. The Ozaukee Interurban Trail continues north to Oostburg in Sheboygan County. The trail was formerly an interurban passenger rail line that ran from Milwaukee to Sheboygan. The train was in operation from 1907 to 1948, when it fell into disuse following World War II. The old rail line was converted into the present recreational trail in the 1990s.

The Wisconsin Central Ltd. railroad, a subsidiary of the Canadian National Railway, operates a freight rail line parallel to the Ozaukee Interurban Trail. The Union Pacific Railroad runs parallel to Interstate 43 in the city. Mequon currently does not have passenger train service. 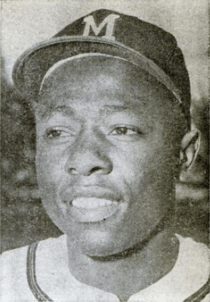 Hank Aaron (1934-2021) lived in Mequon while he played for the Milwaukee Braves. 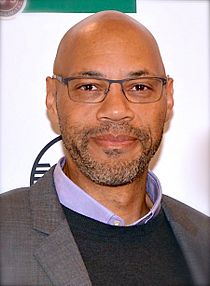 John Ridley (b. 1965) grew up in Mequon and won an Academy Award for writing 12 Years a Slave.

All content from Kiddle encyclopedia articles (including the article images and facts) can be freely used under Attribution-ShareAlike license, unless stated otherwise. Cite this article:
Mequon, Wisconsin Facts for Kids. Kiddle Encyclopedia.