Brown Deer is a village in Milwaukee County, Wisconsin, United States. As a suburb of Milwaukee, it is part of the Milwaukee metropolitan area. The population was 12,507 at the 2020 census.

The village incorporated on January 20, 1955 from a portion of the former town of Granville. In August 2013, the village was listed as 19th on CNNMoney's rankings of Best Places to Live - Where Homes Are Affordable, the highest ranking community in the state of Wisconsin.

According to the United States Census Bureau, the village has a total area of 4.40 square miles (11.40 km2), all of it land.

Brown Deer is one of only three Milwaukee suburbs (Glendale and West Milwaukee being the others) where African-Americans make up at least 10% of the general population.

There were 5,275 households, of which 26.4% had children under the age of 18 living with them, 45.5% were married couples living together, 11.4% had a female householder with no husband present, and 39.4% were non-families. 33.7% of all households were made up of individuals living alone, and 12.5% had someone living alone who was 65 years of age or older. The average household size was 2.27 and the average family size was 2.91. 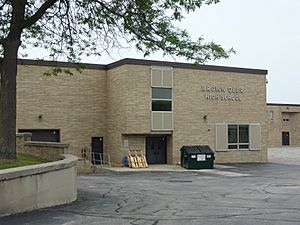 Algonquin Elementary School was formerly located on N. 47th Street. It served kindergarten through 2nd grade until it was closed in 2007.

In 2007, the Brown Deer Schools merged Algonquin into Dean Elementary School (which formerly taught only K4 to 4th grade).

All content from Kiddle encyclopedia articles (including the article images and facts) can be freely used under Attribution-ShareAlike license, unless stated otherwise. Cite this article:
Brown Deer, Wisconsin Facts for Kids. Kiddle Encyclopedia.