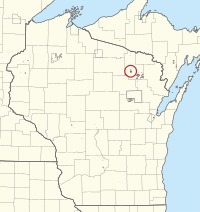 Location of the Forest County Potawatomi Indian Reservation in Wisconsin

Along with the Sokaogon Chippewa Community, the Potawatomi bought the nearby Crandon mine in Crandon to prevent its reopening. The tribes argued the reopening of the zinc and copper mine would harm the environment.

The Forest County Potawatomi Cultural Center and Museum were created to educate the public and pass the culture and traditions of the Potawatomi people to the next generations. The Cultural Center is a new way of gathering the people — to share stories and to learn from one another. The Forest County Potawatomi Community welcomes Native Americans and non-Native Americans alike to learn about the community and their contributions. With input from community elders and internationally-known museum designers, many unique, informative and entertaining exhibits were constructed and are now captivating general public visitors. The 2,700-square-foot (250 m2) permanent exhibit, which is bilingual (Potawatomi and English), is divided into four main sections: a history of the Potawatomi, entitled The Long Walk; an interactive kiosk, entitled People Who Share a Language; a display of different traditional elements, entitled Traditional Ways; and a display of the heritage of the present day tribe. Other highlights of the exhibit include: "People of the Three Fires" main diorama-recreation of the Council of Three Fires is located in the center of the exhibition. "The Gathering": video presentation of the various Potawatomi communities across North America. "The Wall of Treaties"—reproductions of 43 United States and seven Canadian treaties conducted with the Potawatomi. "Wigwas Tthiman" (Birchbark Canoe)—this birchbark canoe was constructed on site at the Potawatomi Cultural Center and Museum using traditional methods as a living display. The canoe project took five weeks to complete and visitors were able to watch each step of the process. "Living History/Craft Classes"—Community instructional classes such as: moccasin, flute, dance regalia, scale model canoe building, language classes, birch/quill and black ash basketry are offered throughout the year.

All content from Kiddle encyclopedia articles (including the article images and facts) can be freely used under Attribution-ShareAlike license, unless stated otherwise. Cite this article:
Forest County Potawatomi Community Facts for Kids. Kiddle Encyclopedia.