Elementary schools in the United States facts for kids 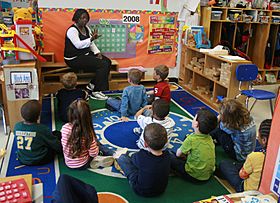 A teacher and her students in an elementary school classroom

An elementary school is a primary school which is the main point of delivery of primary education in the United States, for children between the ages of 5–11 and coming between pre-kindergarten and secondary education.

In 2001, there were 92,858 elementary schools (68,173 public, 24,685 private) in the United States, a figure which includes all schools that teach students from First Grade through Eighth Grade.

According to the National Center for Education Statistics, in the fall of 2017 almost 35.6 million students attended public primary schools.

It is usually from kindergarten through fifth grade. 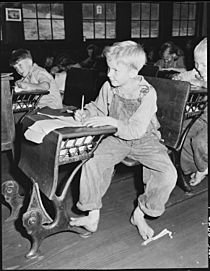 A boy in an elementary school in Kentucky, 1946 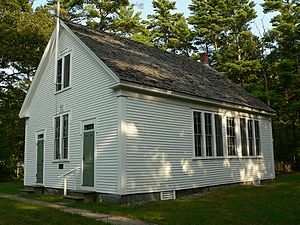 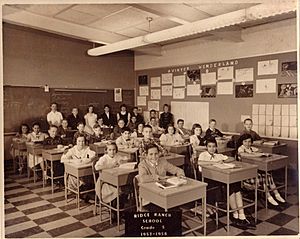 Originally, elementary school was taking children from kindergarten through grade 8; and secondary school was the high school grades 9–12. This system was the norm in the United States until the years following World War I, because most children in most parts of the rural United States could go no further than Grade 8. Even when the high schools were available, they were often not accessible.

By the late 1960s the junior high school started to get replaced by the middle school. This change saw grade 9 considered as (senior) high school, with grade 6 sometimes included in middle school with grades 7 and 8. Now, the 20th-century American education began with the elementary school finishing at grade 8, the 21st century begins with the American elementary school finishing at grade 5 in many jurisdictions, though the older systems are still operating in some areas.

Over the past few decades, schools in the USA have been testing various arrangements which break from the one-teacher, one-class model. Multi-age programs, where children in different grades (e.g., Kindergarten through to second grade) share the same classroom and teachers, is one increasingly popular alternative to traditional elementary instruction. Another alternative is that children might have a main class and go to another teacher's room for one subject, such as science, while the science teacher's main class will go to the other teacher's room for another subject, such as social studies. This could be called a two-teacher, or a rotation. It is similar to the concept of teams in junior high school. Another method is to have the children have one set of classroom teachers in the first half of the year, and a different set of classroom teachers in the second half of the year. 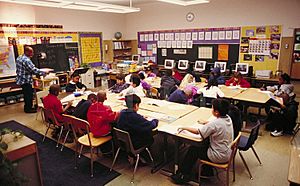 Elementary Schools are for kids from 5-11 years of age

Primary education tends to focus on basic academic learning, skills that help a person master a trade or a job and skills we use everyday to interact and communicate with others, introducing children to the broad range of knowledge and skills they need to succeed in life – and, particularly, in secondary school.

In general, a student learns basic arithmetic and sometimes basic algebra in mathematics, English literacy (such as basic grammar, spelling, and vocabulary), and the basics of other subjects.

Learning standards are identified for all areas of a curriculum by individual states, including those for mathematics, social studies, science, physical development, the fine arts, and reading. The No Child Left Behind Act has made sure that standards in curriculums exist at the state level.

Basic subjects are taught in elementary school, and students often remain in one classroom throughout the school day (until starting different blocks), except for physical education, library, music, and art classes. However, in some schools, especially primary, physical education, art and music are not taught.

The school district selects curriculum guides and textbooks that reflect a state's learning standards for each grade level. 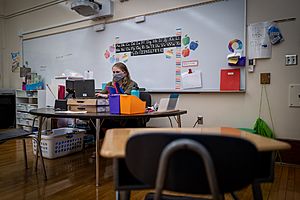 Teachers typically earn either a Bachelors or master's degree in Early Childhood and Elementary Education.

Public Elementary School teachers typically instruct between twenty and thirty students of diverse learning needs. A typical classroom will include children with a range of learning needs or abilities, from those identified as having special needs to those that are gifted in some areas.

Teachers use a variety of ways to teach, with a focus on getting pupils attention. Humor is sometimes used. Cartoons, for example, can capture ideas in one image.

All content from Kiddle encyclopedia articles (including the article images and facts) can be freely used under Attribution-ShareAlike license, unless stated otherwise. Cite this article:
Elementary schools in the United States Facts for Kids. Kiddle Encyclopedia.