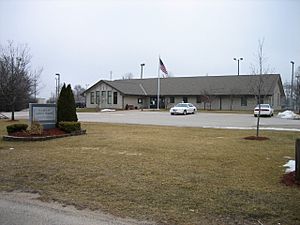 North Prairie is a village in Waukesha County, Wisconsin. It is located in the Town of Genesee, near the town's southwestern corner. The population was 2,141 at the 2010 census.

Three prospectors from Mukwonago named the village in 1826. Blacksmiths from Eagle, Chas. Raynaus and Mr. Denny, were the first settlers to arrive that following year, although the first claim came from Stillman Smith. Farmers began to settle the North Prairie in the 1830s to raise their prize livestock and grain. The population grew and in 1840 Raynaus began the first school from his house.

By 1850 the village had a general store and post office. The Milwaukee & Mississippi Railroad went through in 1852, but the village remained mostly rural. North Prairie would later become one of the area's more noted residential centers. A rumor of oil in 1866 enabled the North Prairie Petroleum Company to fund $50,000 "to dig a hole & extract oil or minerals," but this venture was a failure.

St. John's Lutheran Church was built in 1877 and North Prairie later incorporated in 1919. Morey Milk Condensery opened a plant in 1917 and by 1920 North Prairie saw a jump in growth due to this industry. Morey Milk employed over 200 people and became a primary source of income to more than 85% of the village households. The plant was sold in 1924 and is no longer in operation.

In an interview with the Milwaukee Journal Sentinel in 2003, the previous owners of Bill's Self-Service and Mini-Mart, Bill and Avis McKenzie, described how the village boomed in the 1940s and 1950s. "We had three grocery stores, a hardware store, a mill, a granary, a post office, a drug store with eating counter, a few taverns with eating space, and three service stations, which at that time all had garages for car repair... One by one, they left town. Now we have one tavern, two service stations, one diner - and Bill's Service."

There were 773 households, of which 38.8% had children under the age of 18 living with them, 68.6% were married couples living together, 6.2% had a female householder with no husband present, 3.4% had a male householder with no wife present, and 21.9% were non-families. 16.0% of all households were made up of individuals, and 4% had someone living alone who was 65 years of age or older. The average household size was 2.76 and the average family size was 3.14.

Prairie View Elementary School is located on Highway E, set into the gently rolling hills and oak savanna of the kettle moraine area of Wisconsin. The elementary school is a part of the Mukwonago Area School District. There are 2-3 teachers in each grade.

All content from Kiddle encyclopedia articles (including the article images and facts) can be freely used under Attribution-ShareAlike license, unless stated otherwise. Cite this article:
North Prairie, Wisconsin Facts for Kids. Kiddle Encyclopedia.