Waukesha is a city in and the county seat of Waukesha County, Wisconsin, United States. It is part of the Milwaukee metropolitan area. Its population was 70,718 at the 2010 census. The city is adjacent to the Village of Waukesha.

The area that Waukesha now encompasses was first settled by European-Americans in 1834, with Morris D. Cutler as its first settler. When the first settlers arrived, there was nothing but dense virgin forest and wild prairie. The settlers laid out farms, constructed roads, erected government buildings and established post routes.

Waukesha was a New England settlement. The original founders of Waukesha consisted entirely of settlers from New England, particularly Connecticut, rural Massachusetts, Vermont, New Hampshire and Maine, as well some from upstate New York who were born to parents who had migrated to that region from New England shortly after the American Revolution. These people were "Yankee" settlers, that is to say they were descended from the English Puritans who settled New England in the 1600s. They were part of a wave of New England farmers who headed west into what was then the wilds of the Northwest Territory during the early 1800s. Most of them arrived as a result of the completion of the Erie Canal as well as the end of the Black Hawk War. When they arrived in what is now Waukesha County there was nothing but dense virgin forest and wild prairie, the New Englanders laid out farms, constructed roads, erected government buildings and established post routes. They brought with them many of their Yankee New England values, such as a passion for education, establishing many schools as well as staunch support for abolitionism. They were mostly members of the Congregationalist Church though some were Episcopalian. Due to the second Great Awakening some of them had converted to Methodism and some had become Baptists before moving to what is now Waukesha County. Waukesha, like much of Wisconsin, would be culturally very continuous with early New England culture for most of its early history.

Over the years, many believed, incorrectly, that the origin of the name of the city was an Algonquian word meaning "fox" or "little foxes," though it is actually an Anglicization of the Ojibwe proper name Waagoshag or the Potawatomi name Wau-tsha. Wau-tsha (sometimes written as Wauk-tsha or Wauke-tsha) was the leader of the local tribe at the time of the first European settlement of the area. This is confirmed by accounts of Increase A. Lapham, an early settler and historian of the region. According to Lapham, the word for "fox" was pishtaka. Cutler also told visitors about Wau-tsha, who was described as "tall and athletic, proud in his bearing, dignified and friendly." 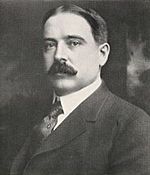 Matthew Laflin, an early pioneer of Chicago, Illinois, provided the capital and enterprise that laid the foundation for Waukesha as a famous Wisconsin watering resort and was the proprietor of the grand resort, the Fountain Spring House. Waukesha was once known for its extremely clean and good-tasting spring water and was called a "spa town." This earned the city the nicknames, "Spring City," and, "Saratoga of the West."

According to author Kristine Adams Wendt, in 1868, Colonel Richard Dunbar, a sufferer of diabetes, chanced upon the medicinal properties of what he later named the Bethesda Spring while viewing a parcel of land recently purchased by his sister. Testimonials found in a Dunbar brochure of 1873 proclaimed the miraculous benefits.

Wendt reports that by 1872, "area newspapers carried accounts of a community ill equipped to handle its new popularity among the suffering multitudes. The semi-weekly Wisconsin (Milwaukee) of July 31, 1872, reported 'that fully 500 visitors are quartered in hotels and scattered in private families here, seeking benefit from the marvelous waters...'"

The "healing waters" were so valued that a controversial attempt was made to build a pipeline between the city and Chicago so that they could be enjoyed by visitors to the 1893 Columbian Exposition. According to Time magazine, "[t]he scheme had been conceived by one Charles Welsh who had been given the springs by his uncle, but after several miles of pipe were laid, it was discovered that the cost was too great."

Richard W. Sears, founder of Sears and Roebuck, may have been attracted to Waukesha by the waters. In failing health, Sears retired from business in 1908 and, according to The New York Times, "spent his time on his great farm near Waukesha." In 1914, Sears died in Waukesha of Bright's disease, leaving an estate estimated at $20 million.

In 1956, Helen Moore, who ran a mud bath spa in Waukesha, appeared as a guest on What's My Line.

Over the years, the natural springs have been spoiled by pollution and a number have gone dry. Water drawn from an aquifer reached radium levels exceeding federal standards.

In 2013, Waukesha applied for permission to withdraw water from Lake Michigan. Because Waukesha is outside the lake's basin, the 2008 Great Lakes Compact makes the city ineligible to withdraw water from the lake without approval from the governors of Illinois, Indiana, Michigan, Minnesota, New York, Ohio, Pennsylvania, and Wisconsin. As of September, 2015, only Wisconsin Governor Scott Walker has consented. 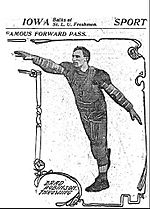 One of the most important "firsts" in American sports history occurred in Waukesha on September 5, 1906, when Carroll College (now Carroll University) hosted the football team from St. Louis University. SLU halfback Bradbury Robinson threw the first legal forward pass in football history in that game. The Carroll players and local fans were stunned. The visitors went on to win 22–0.

During the Cold War, Waukesha County was the site of three Nike Missile batteries, located in the city of Waukesha and nearby Muskego and Lannon. In the city of Waukesha, the U.S. Army and later the Wisconsin National Guard operated the command and control center from 1956 to 1970 at what is now Hillcrest Park, on Davidson Road. The missile pits existed near the corner of Cleveland Avenue and Hwy 164 – first holding Ajax missiles with conventional warheads and later the nuclear equipped Hercules warhead. The Hercules provided a similar nuclear capability as that of the atomic bomb dropped on Nagasaki in World War II. The Midwest Chapter of the Cold War Museum has promoted the preservation of the Hillcrest Park site as a local Cold War museum, honoring Cold War veterans and commemorating America's longest and costliest conflict.

The city is located on both sides of the Fox River, which starts near Menomonee Falls and flows into the Illinois River.

According to Waukesha's 2017 Comprehensive Annual Financial Report, the top employers in the city are:

Located on the city's northwest side, the University of Wisconsin–Waukesha, part of the UW system, offers two-year associate degrees. Students have the option of transferring to four-year institutions to complete their undergraduate education. Waukesha County Technical College has a campus located in the downtown area. Waukesha is home to Carroll University, a private Presbyterian university. Opened in 1846, it is the oldest college in the state.

One of the two New Tribes Bible Institute campuses within the United States is located on a large hill in central Waukesha. Operated by New Tribes Mission, the school doubles as the first part of a four-year missionary training program, which includes field training in the U.S.

All content from Kiddle encyclopedia articles (including the article images and facts) can be freely used under Attribution-ShareAlike license, unless stated otherwise. Cite this article:
Waukesha, Wisconsin Facts for Kids. Kiddle Encyclopedia.