Dousman is a village in Waukesha County, Wisconsin, United States. The population was 2,302 at the 2010 census.

A post office called Dousman has been in operation since 1856. Founded in 1881, the village was named for Talbot C. Dousman, a local farmer and businessman who helped bring the Chicago and North Western railroad to the area. The village was incorporated in 1917.

The village was at one time called "Bullfrog Station" because of the numerous bullfrogs in the area. The local baseball team is still called the Dousman Frogs and an annual frog jumping competition takes place during Dousman's Derby Days.

The Glacial Drumlin State Trail, a 47-mile long hiking-biking-snowmobile trail that runs east-west between the towns of Cottage Grove and Waukesha, passes through the middle of Dousman. The trail is on the former roadbed of the Chicago & North Western Railway. 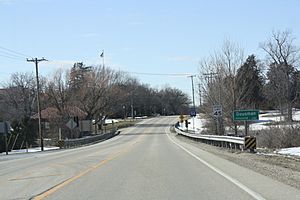 There were 905 households, of which 35.5% had children under the age of 18 living with them, 51.8% were married couples living together, 9.0% had a female householder with no husband present, 3.9% had a male householder with no wife present, and 35.4% were non-families. 30.8% of all households were made up of individuals, and 19.3% had someone living alone who was 65 years of age or older. The average household size was 2.44 and the average family size was 3.08.

All content from Kiddle encyclopedia articles (including the article images and facts) can be freely used under Attribution-ShareAlike license, unless stated otherwise. Cite this article:
Dousman, Wisconsin Facts for Kids. Kiddle Encyclopedia.